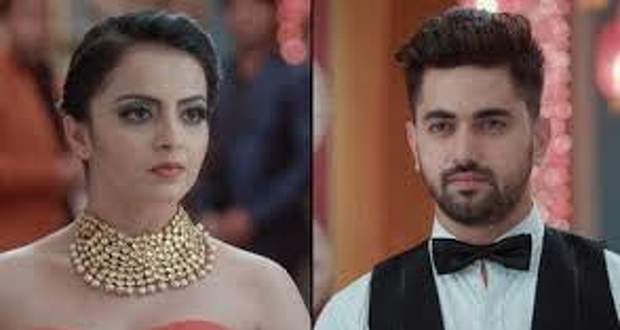 Today's Ek Bhram Sarvagun Sampanna 15 Jul episode starts with Kabir serving Pooja's guests as a waiter. Pooja taunts him, but Kabir smartly replies to her taunts. She gives a tip to Kabir to make him feel insulted. Kabir warns Pooja that she will get offended in her party whereas Pooja does not pay heed to his talks.

Meanwhile, Suman feels delighted that neither Dhruv goes out nor he is drinking, whereas Dhruv mixes the alcohol in his soft drink. Mistakenly Chanda drinks that alcoholic soft drink.  Later on, drunk Chanda does weird things, and family members get worried thinking about what happened to her. Later on, Dhruv tells everyone that he mixed alcohol in the soft drink. Suman and Mr. Mittal scold him for his deed.

At the same time at the party, Dhruv makes an unexpected announcement that Pooja is going to sing a song. Pooja sings a song to impress her clients/ guests. Dhruv asks clients to appreciate Pooja, but the client says that she does not have anything, so he gives a tip (Money) to the client and asks her to give that to Pooja.

Pooja feels humiliated, so she starts breaking the glasses, meantime, Dhruv comes and promises her that he will get back everything very soon. Pooja deliberately trips Dhruv and champagne bottle breaks. Later on, Pooja asks Kabir to pay the price of a broken champagne bottle, or she will deduct the money from his salary.

Upcoming Ek Bhram Sarvagun Sampanna episode update:  Pooja is talking to Amma that she feels nervous as she has to give a presentation to her Chinese clients, whereas Mr. Chopra and his son mix something in Pooja's soup.

© Copyright tellybest.com, 2018 & 2019. All Rights Reserved. Unauthorized use and/or duplication of this material without written permission from tellybest.com is strictly prohibited.
Cached Saved on: Tuesday 25th of February 2020 02:59:55 AM