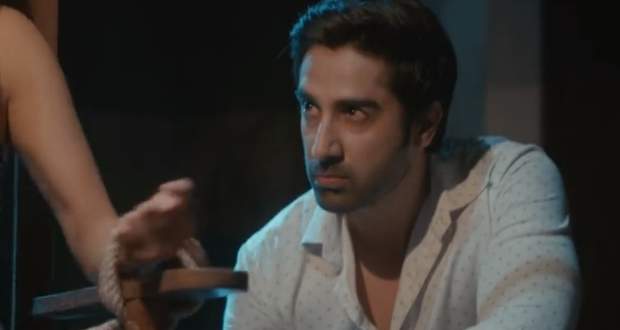 Today's Ek Bhram Sarvagun Sampanna 1 Aug episode starts with Kabir asking Dhruv to not spoil his life because of alcohol. He decides not to tell anyone about Pooja.

In the morning, Rani and Amma get worried for Pooja. Rani blames Kabir and other Mittals for kidnapping Pooja.

Meanwhile, Pooja is tied to a chair in an isolated place and shouts for help.

Later, Kabir reaches office and Chopra blames Kabir for kidnapping Pooja. Amma comes and says Kabir must not have done it. She asks for help to find Pooja. Kabir gets suspicious of Chopra and Ranjeet and overhears their conversation.

Kabir gets a call from Sonali to come to the police station. Trustee informs Kabir that Jay has helped others for helping students in cheating and taking money.

At the same time, Rani comes in the police station and creates a scene. She blames Kabir for kidnapping Pooja.

At home, Jay apologizes and says he will not do anything like that again.

Kabir brings the driver to the police to help with the case. The driver offers to tell the features of the bike driver.

Meanwhile, Pooja struggles and asks about the identity of the kidnaper. Later, Kabir gets suspicious of Dhruv and he is shown as a kidnapper with Pooja.