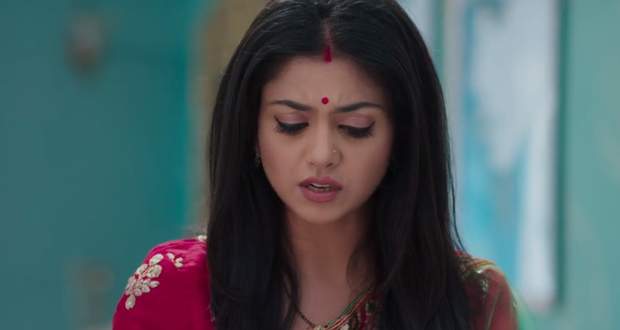 Jahnvi also tells Amma that she is confused about Dhruv.

Dhruv asks Kavya to give his wallet to driver he has send.

Kavya goes to take Dhruv’s wallet from his room. Chanda comes there and blames Kavya of stealing the wallet.

Chanda starts snatching the purse and it fells on the floor with all belongings getting scattered.

Kavya sees a photo of Jahnvi with Pooja Sharma written on the back.

Kavya remembers that Pooja Sharma’s certificate was in Manohar’s file.

Jahnvi adds some capsules in the dal.

Kavya comes in the kitchen and tries to tell Jahnvi about the photo.

PK starts shouting at everyone in the living room.

Suman says to Jahnvi to celebrate Naag Panchami as usual.

Kabir blames them to be absent when Arush and Kavya needed them the most.

Kabir tells Arush’s grandparents that he will not let Kavya and Arush go anywhere.

They tell Kabir they will take legal action and leave.

Suman creates a scene after eating the spiked dal.

She starts shouting that Dr. Ashok Sharma is back.

© Copyright tellybest.com, 2018 & 2019. All Rights Reserved. Unauthorized use and/or duplication of this material without written permission from tellybest.com is strictly prohibited.
Cached Saved on: Saturday 18th of January 2020 03:26:20 PMCached Disp on: Wednesday 22nd of January 2020 07:38:49 AM