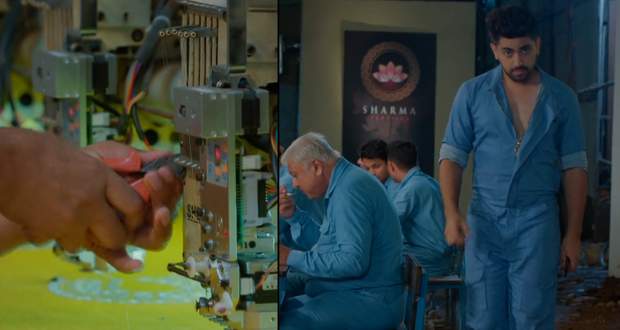 Today's Ek Bhram Sarvagun Sampanna 24 Jul episode starts with Pooja helping the workers with the consignment. Kabir gets shocked to see her soft side. Peon informs this to Chopra.

Chopra gives something to peon and tells him to wait for his instructions. He is planning something to stop the work.

Rani finds the gifts from Ranjeet and gets delighted. Kabir threatens Ranjeet to behave himself and not to mock the workers.

Pooja arrives where workers are having food. She decides to serve her food to everyone but Kabir denies eating it.

The peon messes with the machines on Chopra's orders. Later, when the work starts, Kabir is about to get hurt from the machine but Chacha saves him.

Chopra says they should get the machines checked as it is very risky for the workers. He suggests workers should not be forced to work now.

Kabir says whoever wants to work can work and that he will continue to prepare for the consignment.

All the workers decide to work for the company. Later, Pooja gives some money to Chacha for his medical needs.

She thanks Kabir too for helping her. Dhruv comes and starts insulting Pooja. Later, he stabs Pooja in the stomach with a scissor.

Upcoming Ek Bhram Sarvagun Sampanna episode update: Clients get upset with the late delivery while Kabir gets in a fight.