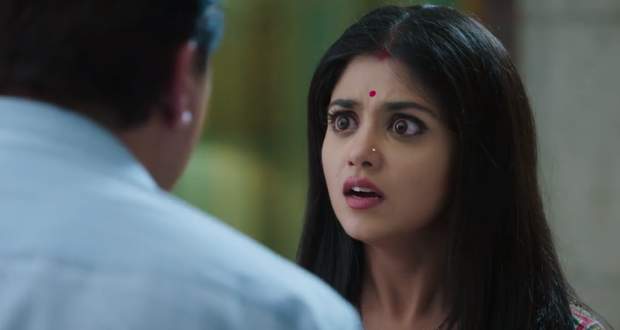 Today's Ek Bhram Sarvagun Sampanna 24 Jun episode starts with Suman telling PK that he did wrong with Ashok Sharma in front of everyone.

Kabir warns Pk to not touch his mother again.

Kavya asks Jahnvi is she knows anything about Ashok Sharma. She denies.

Kavya tries to tell Jahnvi about the photograph but Dhruv comes and asks Jahnvi to call the doctor.

Kavya comes to know from Grandpa that Ashok Sharma’s daughter was Pooja Sharma.

Arush tells Kavya that Jahnvi told him to call his grandmother and not to tell anyone.

Kavya comes and tells everyone that Jahnvi is Pooja Sharma and gives the photo to PK.

PK doesn’t believe Kavya and tells her that she is Pooja Sharma not Jahnvi.

In the flashback, Jahnvi is seen hinting PK that Kavya is Pooja. Jahnvi tells Amma to get fake documents of Kavya.

PK shows Kavya her certificates with Pooja Sharms written on them.

Kavya tells Jahnvi she knows her true face but nobody can hear a word against Jahnvi.

PK leaves the living room and comes back with a gun pointing it at Kavya.