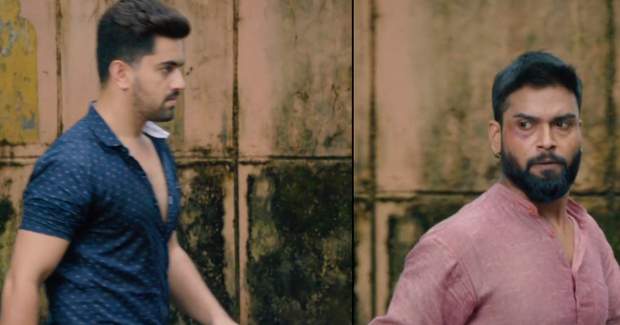 Today's Ek Bhram Sarvagun Sampanna 25 Jul episode starts with Dhruv attacking Pooja with a scissor. Later, it all turns out to be Dhruv’s imagination. He leaves without saying anything.

Jay and Sonali get delighted to hear stories from Daadu. Dhruv comes and starts shouting at Jay for taking Kabir’s side.

Vijay tells Kabir to get some rest and he leaves for home. Later, Chopra plans something else to stop the delivery of the consignment.

Pooja offers a ride to Kabir in her car. He denies at first but agrees later. Pooja gets a call that the tempo carrying the consignment has been stolen.

Pooja gets another call from clients saying consignment is very late and that they have only 20 minutes. Kabir assures he will get the tempo.

Pooja tells Chopra to wait and not tell clients about the theft.

Kabir finds a guy with a cut under his eye. He catches him and asks about the tempo. He reaches their place of hiding and fights them fiercely.

He drives the tempo but it stops on the way. Pooja thinks she shouldn't have trusted Kabir

© Copyright tellybest.com, 2018 & 2019. All Rights Reserved. Unauthorized use and/or duplication of this material without written permission from tellybest.com is strictly prohibited.
Cached Saved on: Saturday 1st of February 2020 01:00:40 AMCached Disp on: Wednesday 19th of February 2020 12:29:34 AM