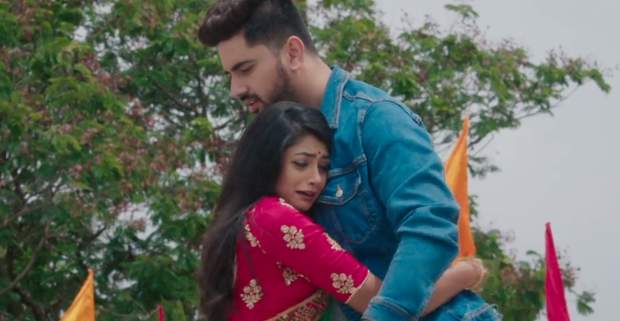 Everybody stops him and Arush gets scared.

Jahnvi tells Kavya to leave before something bad happens.

Kavya tells everyone that they will realise their mistake and leaves.

Jahnvi tells Amma that everybody believed Kavya is Pooja Sharma and that now she just needs to get Suman madder.

She also asks Amma to make some papers.

Sonali tells Kabir that Kavya and Kabir had to leave.

Kabir accuses his father of making a fake story against Kavya.

PK says he can also leave if he doesn’t believe him.

Suman again comes and says she knew Pooja Sharma will come back.

Kabir says he is going to bring Kavya back.

PK says he will shoot both if he comes back with Kavya.

PK’s father gets a heart attack.

Jahnvi says before Kavya tells Kabir the truth, she would have made her last move by then.

Kabir finds Kavya in a temple. Kabir says his family doesn’t deserve her.

Kavya says that they should separate now. Kabir states they can start a new life.

© Copyright tellybest.com, 2018 & 2019. All Rights Reserved. Unauthorized use and/or duplication of this material without written permission from tellybest.com is strictly prohibited.
Cached Saved on: Saturday 6th of June 2020 07:04:20 PM