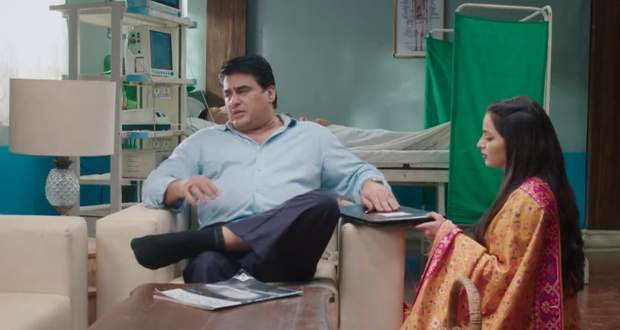 Meanwhile Kavya tells Kabir that Jahnvi wants revenge as she is Pooja Sharma.

Kabir doesn’t believe her. Kavya shows him the photograph with Pooja Sharma written on it.

Kavya tells everything wrong happening in their family is because of Jahnvi.

Jahnvi gives PK some papers to sign. He starts reading them and Jahnvi gets scared.

Jahnvi distracts PK and gets sign on some transfer deed papers.

Arush’s grandparents come in temple where Kavya and Kabir are.

They say that Kavya can also come with them.

Kavya says she will come with them for Arush.

Kavya leaves with Arush and his grandparents.

Before leaving Kabir promises Kavya that he will find out who is the culprit.

Raghav comes to Raghav’s place and asks who told him about Kavya’s truth.

Raghav tells him it was the warden who worked 20 years ago in that adoption house.

Kabir asks for his address.

Jahnvi tells PK that the cloth factory owners wanted him to see the plot and PK says he will go.

Jahnvi says she wants to come along.

Kabir comes to the warden and asks him about the real truth of Pooja Sharma.

The warden calls his people to beat Kabir but get beaten up instead.

The warden tells Kabir that he was asked by Amma to tell a lie.

Kabir comes to Amma and asks who told her to tell the warden to changes identity of Pooja Sharma.

© Copyright tellybest.com, 2018 & 2019. All Rights Reserved. Unauthorized use and/or duplication of this material without written permission from tellybest.com is strictly prohibited.
Cached Saved on: Saturday 6th of June 2020 07:06:39 PM