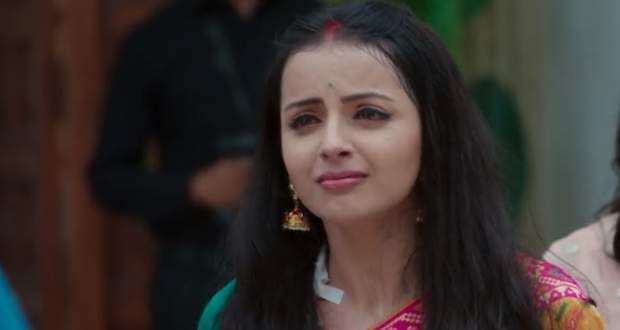 He says to PK that he is repaying for his crimes. PK denies all the blames.

Kabir asks him to speak the truth. PK confesses everything.

He claims he did everything for his family.

PK wants to take revenge from Jahnvi but Kabir tells him to go to police first and accept his crime.

Meanwhile, Jahnvi removes Prem Niwas from the house and breaks it into pieces. She adds Ashok Niwas in its place.

She dedicates it to her father.

Ishani is proud of her sister for avenging their father’s death.

In the hospital, Dhruv enquires about Jahnvi. PK gets angry.

He tells Dhruv that Jahnvi is the one who tried to burn him alive.

Jahnvi remembers her father and gets happy for taking her revenge from PK.

At the same time, Amma comes and tells her maybe PK is not dead.

She also tells her that Kabir knows the truth.

PK reaches home and is shocked to see bodyguards and name plate on their doorstep.

Others don’t understand the situation as they are unaware of the truth.

Jahnvi reveals her true self as Pooja Sharma.

She blames PK of misusing the formula of her dad’s medicine.

Dhruv gets heartbroken to see his wife like that.

Jahnvi claims her marriage to Dhruv was also fake.

She throws the mangalsutra in his face and warns him to stay away.

Kabir assures Jahnvi that law will punish PK Mittal for his crimes.

Jahnvi says its too late and they have to leave.

Jahnvi throws everyone out without any luxury.