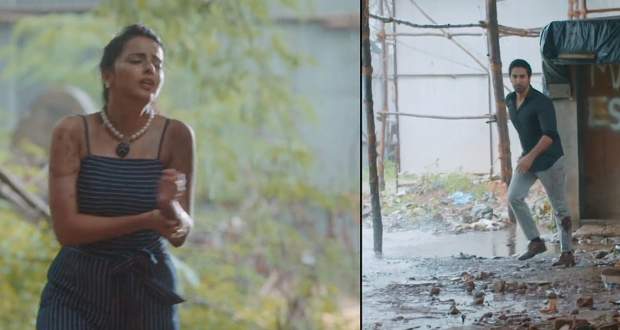 Today's Ek Bhram Sarvagun Sampanna 2 Aug episode starts with Dhruv approaching to kill Pooja. He stops when he gets a phone call. He leaves her struggling in the chair.

Later, Kabir enquires from Dhruv about his phone. He further accuses of him kidnapping Pooja. Suman stops their fight.

Police enquire from Amma if they doubt someone for kidnapping Pooja. Chopra tells Ranjeet to keep an eye on Kabir.

Daadu and Suman tell Kabir to not doubt Dhruv for the kidnap. Meanwhile, Pooja struggles to get free from the chair. Pooja falls along with the chair and gets hurt by bottle glass. At the same time, Kabir finds Dhruv sleeping with Daadu.

In the morning, Kabir apologizes to Dhruv for blaming him. Later, he follows Dhruv and Ranjeet follows them both.

Kabir gets left behind and is unable to catch Dhruv. On the other hand, Dhruv reaches his secret place and threatens Pooja again.

Kabir takes the help of auto driver to reach Dhruv’s destination. He reaches the place and starts shouting for Dhruv. Dhruv leaves Pooja alone upon listening to his voice.

Pooja gets successfully out of the chair and attacks Dhruv with a broken glass bottle. Kabir reaches at the same time and tries to stop Dhruv but gets pushed by him instead.

Ranjeet also reaches there and informs his father about the place. Dhruv finally catches Pooja.