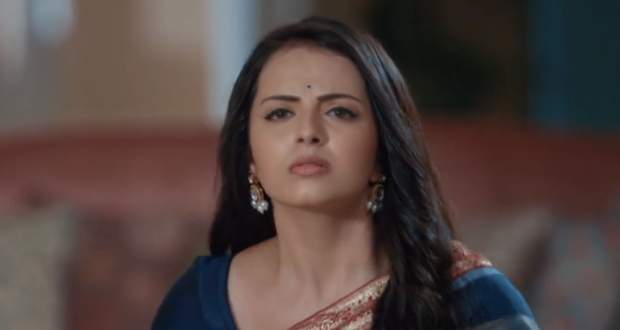 Today's Ek Bhram Sarvagun Sampanna 3 Jul episode starts with Pooja burning all the cardboards of PK Mittal. At the same time, Kabir enters sees to everything.

Pooja (Jahnvi) says he has come at the right time. Kabir requests her to at least give a roof for his family as it was not their fault.

Pooja throws coins at him and says he only deserves this. She says everything belongs to her.

She accuses the whole Mittal family of staying quiet and taking the side of wrong. She says she will never forgive his family.

Kabir accuses her of becoming just like his father, which he never wanted. He declares he will come to take everything back.

In the morning, the police come to Raghav’s house and accuse him of helping PK in the murder of Ashok Sharma. He gets suspended and is taken for inquiry along with his wife.

The police also order to vacate the house as they have to seal it. Kabir assures his mother they will fight the situations.

Kabir informs his grandfather that nobody wants to help them. He assures they are together and that’s the most important thing.

Pooja comes to meet her sister and tells her she will bring anything for her. Ishani (Rani) demands Kabir. She says she doesn’t want her gifts.

Pooja (Jahnvi) reminds her of their revenge, but Rani (Ishani) threatens to leave from there as well. Pooja gets devastated when Amma tells her to go.

Meanwhile, Kabir gets in a fight with the front desk guy of a hotel for insulting his sister. He tells his sister to hit him.

Kabir tries to stay strong for his family and gives a positive light to their situation for staying under one roof.

Pooja is left alone in the big house and gets angry with the song playing on the radio. She is upset with Rani not coming with her. She tries to stay happy with her success, but deep down, she is lonely.