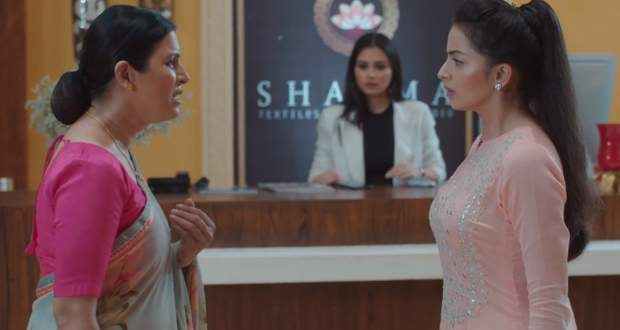 Today's Ek Bhram Sarvagun Sampanna 5 Aug episode starts with Dhruv approaching Pooja with a thick wooden stick. He is about to hit Pooja when Kabir comes and stops him. Kabir tries to stop him from running but fails.

At the same time, the police arrive along with Chopra and Ranjeet.

Kabir tries to catch Dhruv but he escapes on a truck. Later, Amma gets upset for Pooja’s condition when she starts speaking in an unconscious state.

Ranjeet says Kabir has helped Dhruv escape while Kabir also tells the whole story to Suman. Chopra proposes to get Kabir arrested but Pooja says she doesn’t want to complain against him.

Later, Pooja starts digging a hole in their garden. Rani wants Kabir to get arrested but Pooja has some other plans for him.

Pooja feels somebody’s presence outside and gets scared in her sleep. She has a nightmare that Dhruv is trying to kill her.

In the morning, Pooja starts questioning about the preparations of the fashion show. Chopra is not able to answer a single question properly.

Suman arrives at Sharma textiles and starts blaming Pooja for spoiling her son’s life. She threatens her and tells to hurt her instead.