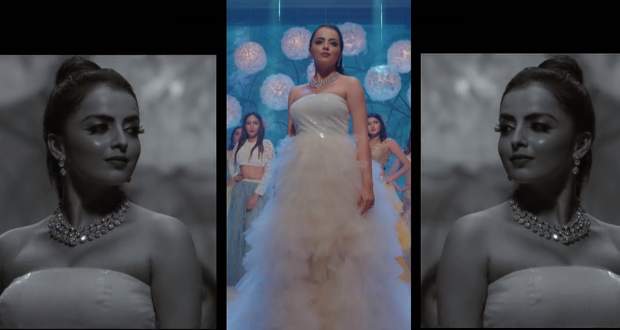 Today's Ek Bhram Sarvagun Sampanna 7 Aug episode starts with Kabir finding out the room is empty where Dhruv was supposed to be and the window is open. He gets a call stating that Dhruv has gone to ruin fashion show.

The fashion show begins with models walking the ramp with their beautiful moms. Later, Pooja gets invited to the stage and is asked to talk about her mother.

Pooja gives a soulful speech about her mother and the importance of her presence in a child’s life. Later, Chopra and Ranjeet appreciate her speech. He has some plan against Pooja on the stage as a showstopper.

Suman gets a call from someone stating that Dhruv is going to ruin the fashion show. She decides to go and stop him.

The show turns super hit with models and Pooja walking the ramp in traditional dresses. Meanwhile, Kabir is trying to reach the fashion show as soon as he can.

Pooja’s show is a hit but Chopra has planned something for the end to ruin it. At the same time, Kabir gets a call that something is wrong with the photo frame on stage.

Kabir reaches on time to save Pooja but it all turns out to be Chopra’s plan to ruin the show. He just wanted to put Kabir in a tough spot.

Pooja thinks Kabir wanted to ruin the fashion show and slaps him.

Upcoming Ek Bhram Sarvagun Sampanna episode update: Pooja gets mad at Kabir and threatens to send him in a place from where he can’t come back.

© Copyright tellybest.com, 2018 & 2019. All Rights Reserved. Unauthorized use and/or duplication of this material without written permission from tellybest.com is strictly prohibited.
Cached Saved on: Tuesday 4th of August 2020 11:15:15 PMCached Disp on: Thursday 6th of August 2020 08:11:14 PM