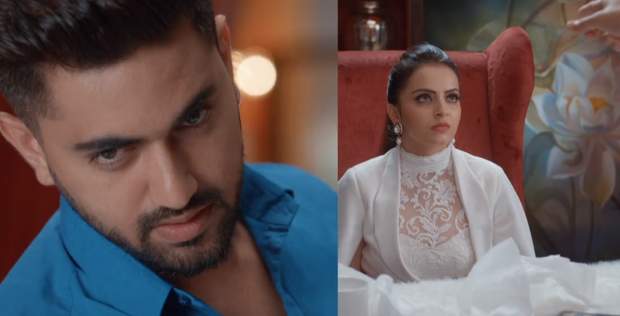 Today's Ek Bhram Sarvagun Sampanna 8 Jul episode starts with Kabir coming at the office and the employees enquiring about the events happening.

Meanwhile, Pooja is worried about Kabir’s arrival. Mr. Chopra assures her that he will handle him.

Kabir is shocked to see the changed colours of Mr. Chopra. He calls him a wolf who takes advantage of other people’s situations. Mr. Chopra tells him to stay aware.

Chopra calls out for guards, but Kabir warns he was in the army and can very well protect himself. Pooja agrees on having a conversation with Kabir.

He is told to stand by Pooja. He gets up and sits on the table instead. He calls Pooja’s whole life rented.

Kabir demands job in Pooja’s company. She tells him to message such jokes and not to waste her time.

Kabir challenges her that she knows nothing about the working of the company. He assures her she will need him soon. Pooja orders him to get out.

Kabir, on the other hand, is confident that Pooja will call him for the job.

He comes and talks to the workers and drinks tea with them. He asks Vijay (a worker) to do something for him.

Meanwhile, Suman is worried about Dhruv and tells him not to spoil his life. Kabir comes and tells he will get a job by the end of the day.

Chopra tells Pooja she can stay at home, and he and his son will handle all the business. She tells him not to utter such words again.

Pooja finds out workers have stopped working and comes to meet them. They admit they have a stomach ache from canteen’s food. She tells them to leave and find another job where the food is good.

Chopra calls her aside and says that’s not a right way to handle them. He further says Kabir has deluded them, and he can handle the situation, but Pooja denies.

She tells them to go and take rest for the day and come back to work the next day. She further states there will be no canteen and they have to bring their food.

Vijay demands the food was free and they should get extra money. Pooja says she is just doing everything to take care of their health.

She says the ones who have a problem with food can go home and others can start the work at the very moment. All of them get back to work, including Vijay.