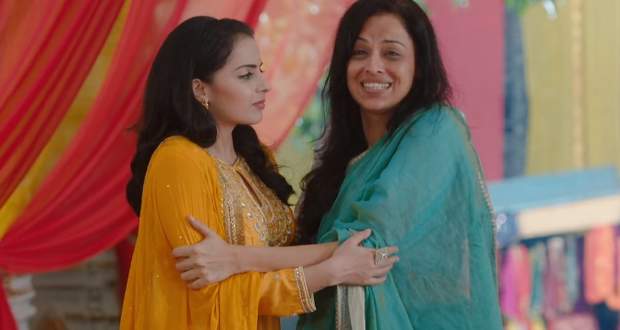 Today's Ek Bhram Sarvagun Sampanna 9 Aug episode starts with Pooja coming to the old temple where she used to come with her mother. She misses her mother and later discovers Suman is in the same temple.

Pooja prays to become a better person in her life while Suman prays against Pooja. She wants Pooja to never get peace in her life.

Later, Pooja gives some clothes to the poor. At the same time, she sees a woman taking away someone's daughters and saying that it’s her Rani and Pooja.

Pooja gets shocked to see her mother alive. She tries to tell her mother that she is Pooja but she pushes her away. She starts singing some song which stops her mother. Her mother accepts her as Pooja and gets happy.

Later, Suman again curses Pooja for never being happy. Pooja’s mother sees Hawan fire and gets scared. She again refuses to believe she is Pooja and runs away from her.

The driver talks to someone and calls an ambulance for Pooja’s mother. Chopra is the one calling the driver and asking for updates.

The nurse refuses to let Pooja stay in the ambulance. Pooja decides to follow the ambulance in her car.  She informs Amma about finding her mother.

Chopra is planning something against Pooja and at the same time, Pooja loses the ambulance because of a truck.

Upcoming Ek Bhram Sarvagun Sampanna episode update: Pooja enquires about the ambulance at the hospital and finds out no ambulance was brought there.