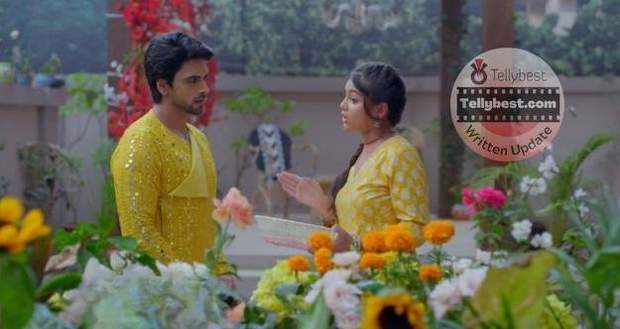 Today's Faltu 10th December 2022 episode starts with Faltu putting the flower accessories on Tanisha while she has her eyes closed in excitement.

As Tanisha opens her eyes and sees herself in the mirror, she exclaims saying that if she was a boy, she would have fallen in love with herself.

Faltu lets Tanisha's friends inside who praise her and start taking selfies with her while Faltu feels left out.

Meanwhile, in the hall, the family members are happily dancing and celebrating while Kanika comes and sits with Dadi and Savita.

Dadi gives her the Haldi and tells her to grind it while Kanika reveals how she has lost many precious memories with Tanisha while handling the role of being both parents.

However, she wipes her tears as she says that she will compensate for it at the wedding by doing every single ritual there with her daughter.

Savita tries to lighten the situation by saying that Tanisha's father is there with them.

Kanika smiles saying that she is glad Tanisha has gotten such loving in-laws while Dadi pulls her leg by telling that Tanisha will not be her daughter after the wedding but a daughter-in-law.

Meanwhile, Tanisha's friends make fun of Faltu while Tanisha tells them to stop as Faltu is their guest and clicks pictures with her.

Back in the hall, Janardan and Harsh get worried as the caterers are still not there while Govind informs them that the caterer is not picking up his calls.

However, the caterer calls Govind just then and lies to him that they had gotten in an accident and are on their way to the Mittal palace.

In reality, Pappi has attacked the caterers and has held them at a gunpoint.

Meanwhile, Ayaan is annoyed at Kinshuk's unable to do his turban properly while Alok also tries and fails.

Sid comes there and does Ayaan's turban while they both joke with each other.

Rijula comes there and sends the boys away while Ayaan tells her that she has to take Faltu to the cricket academy as he has done the rest.

Meanwhile, Pappi comes to the Mittal house disguised as the head chef from the caterers and starts looking for Faltu.

Back at Ittarpur, Angoori is talking to Ratan on call and he tells her about Pappi's plan while Pratap overhears them.

Further, Rijula stops Faltu from going with Tanisha and reminds her that she has to go to the cricket academy for her final match.

However, Faltu requests that they go after the Haldi ceremony.

Rijula shakes her head and leaves while Pappi bumps into Sid and worries thinking that he will recognize him.

However, Sid leaves from there while Pappi continues his search for Faltu.

© Copyright tellybest.com, 2022, 2023. All Rights Reserved. Unauthorized use and/or duplication of any material from tellybest.com without written permission is strictly prohibited.
Cached Saved on: Wednesday 25th of January 2023 12:26:20 PMCached Disp on: Thursday 9th of February 2023 05:15:57 AM