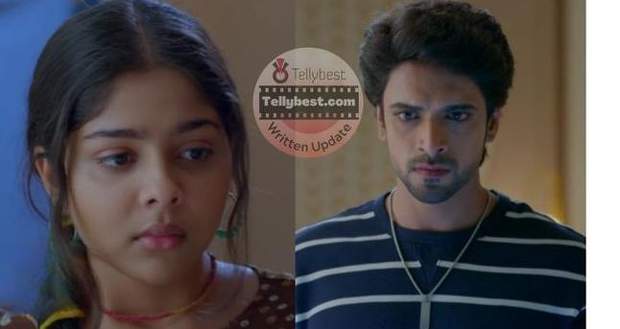 Meanwhile, Siddharth also walks on briefly to the office and tells the assistant that since he will be handling all the interviews, he should have access to all the files also.

In the waiting area, Charan tells Faltu to wait as he & Pratap go inside to give the interview and come back in a short while.

The interviews begin and Siddharth assesses every candidate who walks into his cabin.

On the other hand, Savita prepares delicious food for Tanisha who sits at the dining table along with everyone else.

Dadi jokes that she will enjoy the food today a lot more since everything has been made for Tanisha's tastebuds.

However, Tanisha hesitates to eat the food as she eyes the oily Puris and the curries.

Tanisha says that she has been eating junk for a while so she doesn't want to eat this food as of now.

Janardhan smiles and says they will eat the diet food also like Tanisha while Savita urges Ayaan to order something as per Tanu's preference.

Meanwhile, Charan and Pratap both walk into the interview room, and Siddharth questions where they are from.

Charan answers all the questions sincerely which leads to Siddharth giving him the job.

After they both leave, Siddharth tells the assistant not to send other people as the deal is done.

At Mittal House, Savita tells Ayaan in secrecy that the food made today was all prepared by her and not any other servant.

Hearing this, Ayaan feels that Tanisha unnecessarily denied eating the food, and suddenly, he remembers a flashback involving Faltu when she was eating after her practice and he just sat there beside her.

She sensed that he was hungry and offered him some food.

Kanika also arrives at Mittal House and sits down for breakfast, telling everyone that Tanisha is not used to this kind of food.

She says Tanu has been eating a variety since childhood and prefers to eat small portions of everything.

Ayaan sees this demo in reality as a new set of plates bringing sandwiches, soups, and salads.

Tanisha eats small portions directly from the dishes, making Ayaan say that she doesn't have to eat it like this since now the food has been touched and can't be eaten by anyone else.

On the other hand, Faltu suddenly hears Siddharth's voice in the waiting area and hides behind a pillar.

She then asks somebody in the office the name of the company and it is JM Mart.

She tells all of this to Pratap and Charan and tells them to hurry so they can leave.

Meanwhile, Tanisha and Ayaan come into their room where she apologizes to him for refusing to eat food made by Savita.

She then asks Ayaan to go on a movie date along with Kinshuk and Isha.

Internally, Ayaan says that Tanisha only thinks of herself and what she wants to do while Faltu was the opposite and used to give regard to other people's feelings.

However, he reminds himself that he hates her now.

In the hotel room, Charan decides that he will do labor work if he cannot work in a JM company so Faltu's eye surgery can be done.

Suddenly, Faltu recognizes a man whistling outside to be Pappi and asks Charan to call the police so they can finally end this Tom & Jerry game.

However, three of them get scared when Pappi's men come to knock on their door.

© Copyright tellybest.com, 2022, 2023. All Rights Reserved. Unauthorized use and/or duplication of any material from tellybest.com without written permission is strictly prohibited.
Cached Saved on: Wednesday 25th of January 2023 10:31:44 AMCached Disp on: Sunday 5th of February 2023 03:48:35 AM