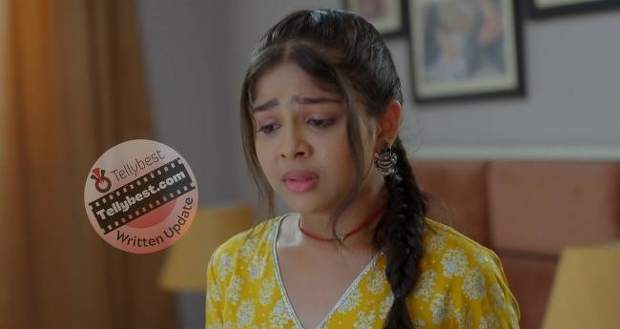 Today's Faltu 11th December 2022 episode starts with Su doing her live and comparing the marriage to grilling and Atharva to a marinated chicken.

Further, she shouts for some music and the family starts having fun while Faltu looks at them and feels a heavy feeling in her heart.

She wondered what it is when Su shouts that live is happening and goes to Ayaan to tell him that the viewers are loving him.

Ayaan reminds her that she also has to put Haldi on him and she gives the camera to Aayesha to complete the ritual.

Afterward, the ladies say that now the used Haldi from Ayaan's body will be given to Tanisha to put on.

However, Ayaan says that it seems disrespectful and asks Panditji if he can just touch the Haldi which can be given to Tanisha.

The panditji agrees to this and the ladies praise Ayaan saying that Tanisha is lucky to have such a respectful and handsome husband.

Rijula says that if nobody is remaining, she will go and give the Haldi to Tanisha.

However, Dadi stops her saying that Faltu still has to apply Haldi to Ayaan.

Elsewhere, Sid tells Tanisha that he has planned a night party to celebrate her last few bachelor hours before the wedding and tells her that he is planning to invite Faltu too.

Tanisha's friends tell Sid to make sure that Faltu does not come to the nightclub in her traditional clothes and wears something appropriate for partying.

Back in the hall, Faltu puts Haldi on Ayaan after which Dadi tells Faltu to bring the Haldi to Tanisha.

Ayaan touches the Haldi and Faltu takes the plate but stumbles due to the weight of the plate while Ayaan holds her hands and saves her.

The Haldi from Ayaan's hand transfers to Faltu while Rijula suggests taking the plate from Faltu as it is very heavy.

However, Dadi insists that Faltu will only go and give the Haldi to Tanisha as she is good luck to the family.

Rijula wonders how she will be able to take Faltu to the academy if she keeps getting busy with work.

Back at Ittarpur, Pratap stands up for Faltu in front of his own mother and tells her that she is the reason for Charan and Jamuna being boycotted from the family.

They both argue while Pratap tells her that she will regret in the future for how she treated Faltu and leaves from there.

Back at the Mittal house, Su and Faltu arrive at Tanisha's plate and Kanika gets happy seeing them.

They both jump from the decoration and get injured a little while the whole family arrives there.

Su tells everyone that Faltu saved Tanisha while Sumitra keeps on blaming Faltu as she says that all the mishaps are happening after Faltu's arrival.

Govardhan argues with Sumitra while Ayaan says that everything she has said about Faltu is wrong.

Dadi tells Tanisha to not listen to Sumitra while Tanisha goes to Faltu and tells her that she is truly good luck to the family.

Tanisha praises Faltu by saying that she did everything she could and even more to save the marriage and help her every step of the way.

Ayaan gets impressed by this version of Tanisha and thinks that his respect for her has increased in his heart.