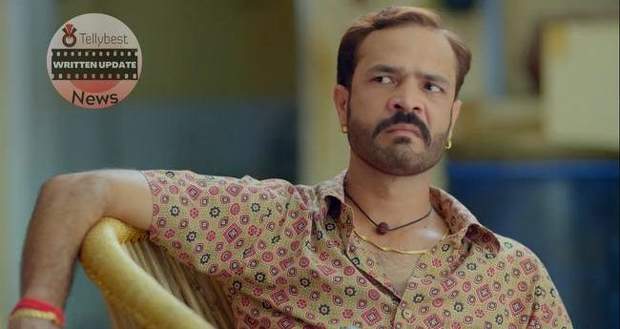 Ayaan tells Charan that no amount of money is worth getting Faltu married to Pappi.

Faltu tells Ayaan that if she takes the money from Ayaan today she will prove the society right.

Ayaan says that it's impossible to earn 1 lakh in 3 days and therefore Faltu should take the money.

Faltu then tells Ayaan to help Anmol with cricket as this would be the same as helping her.

Faltu then tells Ayaan to start Anmol's training tonight itself.

Siddharth then vows to make Ayaan look stupid in front of Janardhan and messages someone to get the job done.

Meanwhile, Ratana and Angoori are discussing how they should subdue Faltu.

Ratan then says there is some big plot regarding Faltu's promise to pay back Pappi.

Angoori wonders whether Ayaan is helping out Charan because of Faaltu's help.

Angoori then overhears Su saying that Ayaan isn't at home either and follows Faltu.

Faltu then finds an abandoned house and hides there from Angoori and dresses up as a ghost and scares away Angoori and Angoori runs back home.

Angoori then bumps into Pratap and asks him where Faltu is but Pratap lies and says that Faltu is sleeping with Jamuna.

On the other hand, Faltu/Anmol reaches Ayaan to practice with him but trips and is saved by Ayaan.

Ayaan then scolds Anmol for being tardy while Anmol promises him that he won't be late from now on.

Ayaan then tells Anmol to run around the ground and then do warm up.

After running Ayaan calls Anmol to come to the crease.

Ayaan tells Anmol to concentrate otherwise the bowler will bowl Anmol out.

Ayaan then throws a ball and gets Anmol out.

Meanwhile, Pappi is making his goons stick new labels on the expired products at Ayaan's mart.

Pappi remarks saying that this way villagers will throw Ayaan out for making them consume expired food.

On the other hand, Ayaan criticizes Anmol's batting technique.

Anmol asks Ayaan to show him how to bat but Ayaan doesn't touch the bat.

Ayaan then comes close to Anmol and fixes his posture and notices the red thread that Faltu wears and recalls Faltu's words.

Ayaan thinks nothing of it and bowls to Anmol and Anmol hits a six on every ball.

He tells Anmol that he has full confidence in her abilities as he knows she has cricket in her veins.

Anmol gets shocked to hear Ayaan call Anmol a female and tells him that he is a boy.

Ayaan however says that no Anmol isn't and he is confident that Faltu will not let Charan lose his respect.

© Copyright tellybest.com, 2022, 2023. All Rights Reserved. Unauthorized use and/or duplication of any material from tellybest.com without written permission is strictly prohibited.
Cached Saved on: Monday 21st of November 2022 05:19:27 AMCached Disp on: Saturday 10th of December 2022 01:57:33 PM