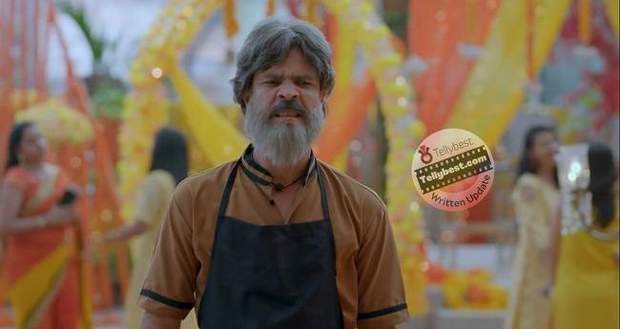 Today's Faltu 12th December 2022 episode starts with Tanisha telling everyone that Faltu was the one who made the flower accessory and she is the one who has helped in all the bad situations.

She further says that Faltu is Anoml for her.

Kanika agrees with Tanu and praises Faltu and hearing this Faltu modestly says that she has done nothing in comparison to the Mittal family’s kindness.

Janardhan says not to waste any more time and get on with the rituals.

Aayan tells Rijula through his eyes to take Faltu away and she complies and tells Janardhan that she is taking Faltu away.

Janardhan doesn’t even bat an eye at Rijula and she takes Faltu away.

After a while, Govardhan and Janardhan scold the caterers for being late in delivering food.

So Pappi disguised as the caterer suggests that they send a helper.

To this Janardhan says that Faltu can help with the food and he orders Govardhan to get Faltu no matter what.

On the other hand, Rijula rushes Faltu but Govardhan intercepts and asks Faltu to help with the caterers.

Rijula and Alok both are against this and tell new ways to handle the situation but Pappi replies to all the solutions with a new problem.

Further, Govardhan pleads to Faltu and she agrees but Rijula tries to tell her that she has some important work but Govardhan talks them out of it.

Pappi thinks in his mind that now Faltu is in his claws and will not escape this time.

Meanwhile, inside Tanu’s Haldi begins and Kanika’s eyes fill with water as she tells Tanu that she loves her and hopes that Tanu forgives her.

Tanisha says that she loves Kanika and is grateful to her.

The Haldi ceremony continues and everyone enjoys it immensely.

On the other hand, Faltu gets suspicious of the caterer and starts to make food.

Pappi plots to unconscious Faltu and take her home while the other workers try to warn Faltu but Pappi gets in the way.

Meanwhile, the Mittals capture the Haldi moments and Aayan is worried that Faltu is still here.

Aayan questions Rijula about why is she not at the academy then Rijula tells Ayaan how Faltu got stuck.

At the same time, Pappi takes out anaesthesia to knock Faltu out but he is interrupted by Govardhan.

Mayawati declares that all the girls have to get ready for the next ritual and they should all eat.

Later, Siddharth decides to have Bachelors and Bachelorette parties.

Then, Pappi reveals his identity in front of Faltu and tells her that now she has to go home.

Inside the house, Aayan and Tanu are bathed in milk in front of everyone while Faltu struggles against Pappi.

© Copyright tellybest.com, 2022, 2023. All Rights Reserved. Unauthorized use and/or duplication of any material from tellybest.com without written permission is strictly prohibited.
Cached Saved on: Wednesday 25th of January 2023 05:18:50 PMCached Disp on: Tuesday 31st of January 2023 07:22:17 PM