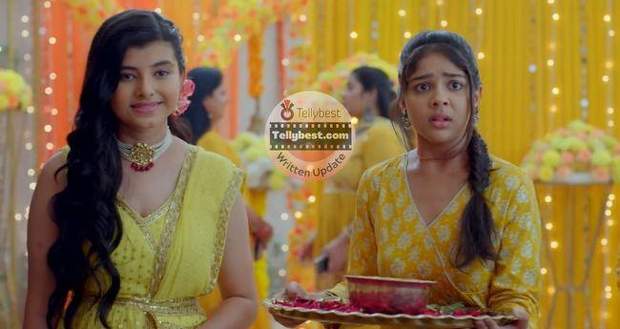 Today's Faltu 13th December 2022 episode starts with Faltu recognizing Pappi and trying to escape while Pappi catches her by her hair and tries to make her sniff the chloroform.

However, Faltu elbows him and manages to escape from his grip as she takes a spatula and starts beating him with her.

As she is leaving, she hears Pappi say that he will marry her at any cost which angers her even more.

Recalling the humiliation her father had endured, Faltu takes a steel bucket and other kitchen utensils and starts hitting Pappi with him who withers like a worm due to the hits.

Faltu tells him that she won't let a leech person like him ruin Ayaan's function and ties him up with ropes.

As Faltu is looking for Ayaan to tell him about Pappi, she runs into Sid who asks her why she's so worried.

She takes him to the kitchen and shows him the tied-up Pappi while she goes to look for an elder.

Sid moves the piece of cloth from Pappi's mouth as Pappi threatens to expose Sid's crimes to the police if he goes to jail.

Meanwhile, Faltu meets up with Ayaan and Rijula and tells them about Pappi as they all rush to the kitchen.

However, they get shocked to see Sid tied to the chair instead of Pappi who is nowhere to be found.

Ayaan asks Sid what happened and Sid recalls untying Pappi and helping him escape while telling Pappi to tie him up.

Back in the present, Sid makes up a fake story of him fighting with Pappi to stop him from going after Faltu and getting hit instead.

Faltu asks Sid if he fought for her and gets emotional while telling her that she is the guest of the whole family.

Later, Govardhan brings the two allies of Pappi and Ayaan tells him to call the police while the cooks reveal that Pappi had kidnapped two other cooks of theirs to listen to him.

Ayaan does not listen and tells Govardhan to call the police while Faltu stops him.

Faltu reasons that they should not call the police turning the wedding time and Sid agrees with her.

Govardhan also agrees with Faltu while coming up with a solution to increasing security.

Later, Ayaan talks to his friend and tells Rijula and Faltu that they still have 30 minutes to reach the Academy.

However, Dadi again stops Rijula and tells her that she and Alok have to sit in the next ritual.

Faltu says that she will go on her own and convinces Ayaan and Rijula to give her money and the address of the academy.

Further, Faltu hails an auto rickshaw and talks to him while telling him that the person (Ayaan) she teased at first has become special to her now.

Back at the Mittal house, Rijula sees Ayaan worried for Faltu and tells him that they should encourage her if she wants to do things independently.

While venting his frustrations, Ayaan is about to blurt out that he likes Faltu but saves himself as he says that he is worried since he was the one who helped Faltu elope.

Ayaan tells Rijula that he cannot lie anymore and says that he will be done with Faltu once she gets selected for the team.

On the other hand, Janardan overhears Kanika telling Tanisha and Savita that she has to go for the selection of the women's cricket team.

Janardan asks Kanika why she has to go and she tells him that she was offered the position of the president of the team and accepted it since it will help their brand.

Back in Ayaan's room, Ayaan tells Rijula that he is worried about what would happen if Janardan learns that he was helping Faltu in becoming a cricketer.

© Copyright tellybest.com, 2022, 2023. All Rights Reserved. Unauthorized use and/or duplication of any material from tellybest.com without written permission is strictly prohibited.
Cached Saved on: Wednesday 25th of January 2023 05:25:55 PMCached Disp on: Thursday 9th of February 2023 05:15:22 AM