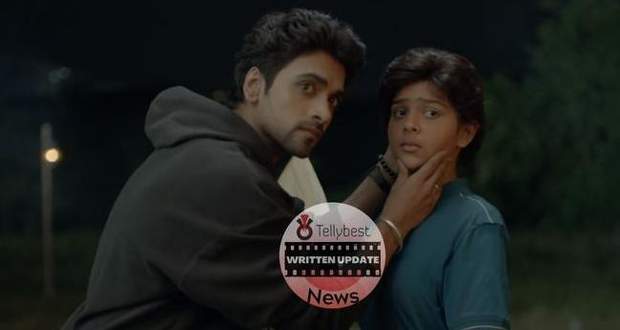 Ayaan then asks her to play various shots and is impressed seeing her and recalls his matches.

Asking Faltu to play a different shot, Ayaan then reaches for the broom to show her but Faltu says she will bring him a bat.

Ayaan recalls his vow to Janardhan and tells Faltu to not bother as he will teach her with the broom itself.

He then plays the shot, to which Faltu remarks stating she understood the shot but not the reason behind him not touching a bat.

Ayaan tells Faltu to concentrate on the tournament as there she will have to play and not him so it doesn't matter.

Moves her body with himself, Ayaan teaches her when suddenly Pratap's voice booms.

Pratap comes inside and says the club manager has asked all the players to meet at the ground to showcase their training.

Faltu becomes anxious hearing this and her vision gets blurry again as she almost falls but Ayaan catches her.

Ayaan convinces her by saying that people will only recognize her talent and not her gender.

Meanwhile, Siddharth calls up an employee of the mart to get a progress check on some work assigned to him.

Suddenly Sumitra barges in and asks Siddharth if the plan has gone awry again.

Sumitra says this is Siddharth's last chance to prove himself otherwise Ayaan will be made the CEO.

In the meantime, Ayaan sees Faltu without the fake mustache and draws one on her, and asks her to remain ever vigilant.

Faltu is about to sit in the car when Angoori asks Ayaan who is the boy.

Ayaan makes Angoori recall that the boy is Anmol Singh, Pratap's friend whom she met at his mart.

After Angoori returns home, she asks Faltu's elder sisters if they have seen Faltu, to which they reply no.

Hearing this, Angoori calls up Pappi and informs them about Faltu's absence and also that Ayaan just left home with Anmol Singh.

Pappi then tell Angoori that he will find out the entire truth about this situation.

At the ground, as Faltu and others are practising Pappi reaches the ground and says that Faltu must be nearby as Pratap and Ayaan are also there.

Later while practising Faltu gets hit but doesn't show, however, Ayaan tells her to pretend as if she was a boy who has gotten hurt.

Ayaan then excuses Faltu and takes her to the washroom which is a men's washroom and asks Faltu to fix her hair.

Pappi see Faltu/Anmol go inside and follow her in, while Faltu looks on shocked.

© Copyright tellybest.com, 2022, 2023. All Rights Reserved. Unauthorized use and/or duplication of any material from tellybest.com without written permission is strictly prohibited.
Cached Saved on: Monday 21st of November 2022 06:17:21 AMCached Disp on: Saturday 10th of December 2022 01:55:25 PM