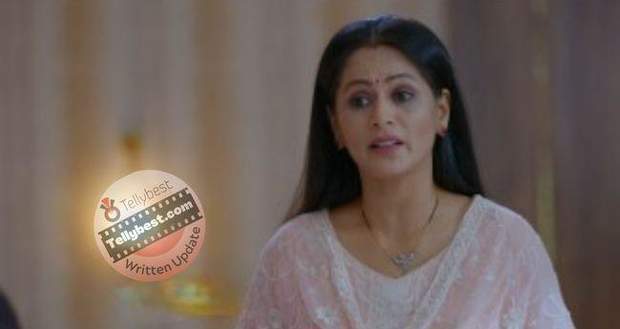 Today's Faltu 14th December 2022 episode starts with Faltu reaching the stadium and thanking the auto-rickshaw driver for helping her reach there on time.

The man wishes her luck and tells her that he will wait for her to show up in the news.

Faltu recalls her moments with Charan and Ayaan thinking that she has to make her dreams complete at any cost.

A girl accidentally bumps into Faltu and starts misbehaving with her while raising her hand to hit her.

However, Faltu stops her in time by holding her hand in midair.

Back at the Mittal house, Sid, Aayesha, Kinshuk, and Su are preparing the list for the party while Ayaan comes there and argues with them telling them that Faltu will not attend their party.

Back at the stadium, Faltu tells the girl that she apologized cause she bumped into her and tells her that she won't tolerate anything more than that.

Faltu demands the girl apologize for raising her hand while others ask Faltu if she even knows who the girl is.

Just then, Sheetal Bhatiya comes there and all the girls get mesmerized while a girl tells Faltu that Sheetal is the no. 1 player for the women's cricket team.

Elsewhere, Kanika arrives at the stadium and tells the person to tell her why she was needed there.

The man informs her that they needed her signatures as the documents will be needed during the selection.

Meanwhile, Sheetal takes her sister inside who is the same girl that argued with Faltu.

Back at the Mittal house, Su and others try to convince Ayaan while Tanisha comes there.

The girls rush to put a dupatta between them while Ayaan leaves saying what he has done should be done.

Once Ayaan leaves, Sid and others complain about Ayaan stopping Faltu from attending the party.

However, Tanisha tells them to not worry since she is the one who is hosting the party.

Back at the Stadium, the person filling the application forms makes fun of the Faltu's name while she tells him that they will be taking her name with pride once she gets into the top 16.

At the same time, Kanika is walking towards her car with Mr. Shukla while Sheetal stops her.

Sheetal introduces her sister Anu to Kanika and requests her to see Anu'a game once while pitching her as a great asset for the women's cricket team.

Kanika smirks as she tells Mr. Shukla to make sure that Anu gets selected in the top 16.

Further, Kanika whispers into Sheetal's ears about getting a deal for the JN Mart's promotions during the matches in the future.

Just as Kanika is about to leave, she spots Faltu and asks Mr. Shukla about it.

He informs Kanika about Faltu being there for the trial match and Kanika orders Mr. Shukla to make sure that Faltu does not get to play in the trials.

Later, Mr. Shukla and Popat come to Faltu and tell her to leave as her trial match will be done the next day with the second batch.

However, Faltu feels that it is a trap and pleads with them to let her play in the trial match today only.

The men do not listen and leave from there while Faltu says that she knows it is all being done by Sheetal and Anu.

Once the trials are over for the day, Faltu again argues with Popat and asks him to tell her why she is being discriminated against.

However, Faltu only argues when Mr. Shukla comes there and tells her to not do any drama and go or else he will cut her name from the trial list.

Meanwhile, at the Mittal house, Ayaan rushes to Rijula and requests her to call Faltu immediately as they need to inform her that Kanika has become the president of the women's cricket association and is at the tryouts.

However, Rijula says that she is disconnecting the calls while Kanika comes from behind and asks them whom she is talking about.

© Copyright tellybest.com, 2022, 2023. All Rights Reserved. Unauthorized use and/or duplication of any material from tellybest.com without written permission is strictly prohibited.
Cached Saved on: Wednesday 25th of January 2023 05:28:54 PMCached Disp on: Tuesday 31st of January 2023 07:21:41 PM