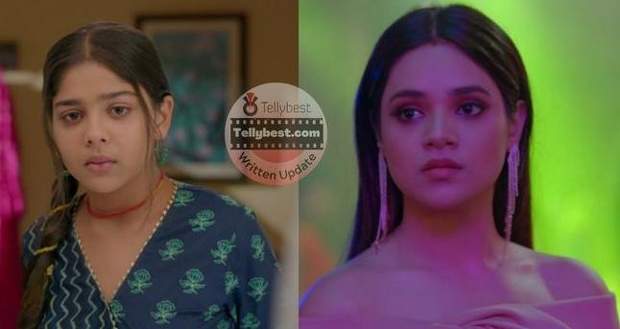 Today's Faltu 14th January 2023 episode starts with Faltu deciding to leave the stadium before Ayaan could spot her, however, it is too late now as Ayaan has already spotted her.

Ayaan keeps trying to join all the dots in his head and wonders what is going on as Faltu is not wearing her sindoor.

Ayaan excuses himself from the commentators and runs after Faltu who has suddenly disappeared.

Meanwhile, Faltu is alone on the main road, almost getting hit by cars and bikes on her way.

Right before a car is about to hit her, Ayaan pulls her back and holds her, without realizing that the man is Ayaan, Faltu requests him to help her cross the road but she soon finds out that the man is no one but Ayaan.

Back at the shopping center, Tanisha and Sid are done shopping, Sid gets really angry when Tanisha calls him her Brother in law, and he asks her to only refer to him as her friend.

Tanisha tells Sid that they should go to Ayaan's cricket tournament as she is missing him.

Meanwhile, Ayaan says to Faltu that he won't let her go anywhere unless she tells him the truth as there is neither sindoor in her head, nor vision in her eyes.

Faltu tries to pull her hand away and yells to him that she should let her go but Ayaan says that if he let her go then she will die in the middle of the road and pulls her closer.

After a pause, Ayaan asks Faltu, if was he the one who filled the sindoor in her head but Faltu insists that it is not the truth.

Sid speeds his car in their direction and is about to hit Faltu when Ayaan pulls her back again and yells at the driver if he is blind.

Ayaan is shocked to see Sid and Tanisha in the car looking right back at him and Faltu.

Tanisha gets out of the car and looks at Ayaan in anger as she sees him holding Faltu.

Faltu again tries to run away but Tanisha stops her and asks her the reason why she is there.

Ayaan says that Faltu has lost her vision and has lied to him at the temple, Ayaan angrily yells at Faltu and asks her why is her head not filled with sindoor this time and where is her so-called husband.

Tanisha tells Faltu that Ayaan deserves to know the truth and she has to tell everyone the truth.

Faltu says that Tanisha belongs to a good and rich household and it doesn't suit her to create a scene in the middle of the road.

It is none of her business to know if she's married or not, Faltu says that she has a husband but doesn't need to prove it by wearing the sindoor 24/7.

After Faltu leaves, Tanisha tells Sid that she feels that Faltu is still hiding something, she asks Sid to find out the truth as she can't see Ayaan like this.

Sid recognizes Pratap because he came along with Charan to seek a job from him.

Back at the car, Ayaan is driving rashly making Tanisha very nervous, she asks Ayaan to calm down but Ayaan yells back at her.