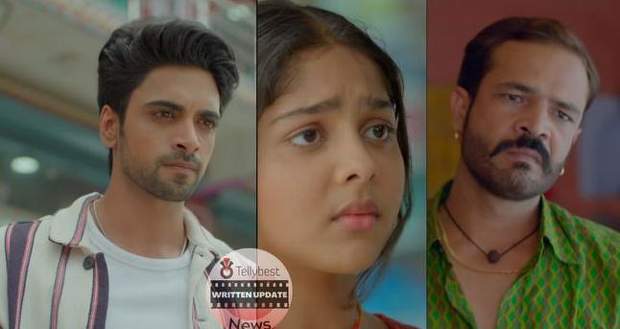 Today's Faltu 14th November 2022 episode starts with Pappi coming inside when Faltu puts her hair in front of her and throws things at Pappi to make him leave.

Pappi then hurriedly leaves the bathroom but realizes that maybe this girl in the boy's washroom is Faltu and goes back inside.

Pappi then knocks on every door when suddenly Anmol appears and is asked to turn around by Pappi.

When Anmol doesn't turn around Pappi goes to grab the collar but Ayaan stops him.

Pappi tells Ayaan that he is sure he saw a girl in the washroom and therefore he came to investigate as she also threw things at him.

Faltu asks Pappi that if things were thrown at him then where are those things when she suddenly notices a towel and hurriedly runs outside.

Pappi and Ayaan follow her and Faltu starts screaming saying that the girl must have been the ghost that Pratap's mother saw the other day.

Ayaan chimes in saying that a few nights back Su also heard the sound of anklets in the middle of the night which makes Pappi scared and he runs away.

At night, Faltu is sleeping upstairs when Ayaan comes over and tells her that he too used to get nervous jitters before every match.

Faltu asks Ayaan what should she do to get over these jitters to which Ayaan answers by saying to look at the stars and find the light within.

Ayaan then thanks Faltu for reigniting his passion for cricket which he had buried deep within.

Before Ayaan can leave Faltu asks if Ayaan would be present at the match tomorrow to which Ayaan replies with a firm yes.

Ayaan then calls Janardhan who tells him to come back home tomorrow morning.

This shocks Ayaan however Janardhan tells him that the date for his engagement is set for tomorrow and so he should be back.

The next day, Ayaan leaves early morning when he starts recalling Faltu's words and Angoori's warnings.

At the guest house, Ratan informs the wedding will take place in the evening when Pratap calls out to Faltu.

Faltu is meanwhile reading an invigorating letter written by Ayaan which fills her with sadness.

Faltu tells Pratap that she will now dress up as Anmol Singh to play the match.

© Copyright tellybest.com, 2022, 2023. All Rights Reserved. Unauthorized use and/or duplication of any material from tellybest.com without written permission is strictly prohibited.
Cached Saved on: Monday 21st of November 2022 07:10:16 AMCached Disp on: Friday 9th of December 2022 03:56:36 AM