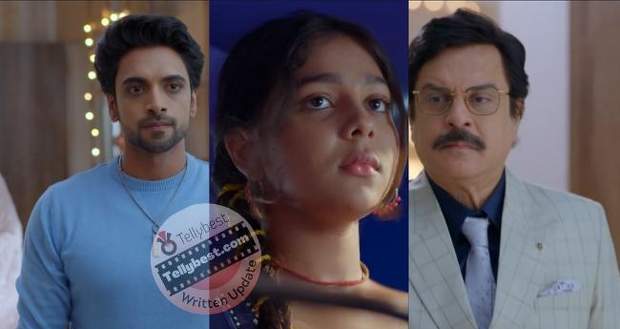 Today's Faltu 15th December 2022 episode starts with Ayaan going to Rijula and asking her to call Faltu so Kanika doesn't get to know that she has gone to give cricket trials.

Just when Ayaan asks Rijula to call Faltu, the name-devil herself enters Rijula's room and questions Ayaan whom he wants to call.

Rijula nervously smiles all of a sudden and tells Kanika that Ayaan was pestering her to make a call to Tanisha as he wants to meet her.

However, Rijula says she was scolding him as the bride and groom are not allowed to meet after Haldi.

Kanika tells Rijula that she is here to meet Faltu and Rijula's smile fades away.

Meanwhile, Faltu walks out of the academy with her cricket bag and picks up the call on her phone.

She thinks it is Rijula but it is Charan, her father, who asks her about the trials.

Faltu informs him that her cricket trial will happen the next day while Charan expresses his gratitude to Ayaan for training and taking care of Faltu.

Internally, Kanika vows to reach the root of their lie while Ayaan compliments her for becoming the president of the Women's Cricket Association, saying her strong presence will guide many girls to follow their passion.

After Kanika leaves the room, Ayaan tells Rijula that after Faltu gets selected for the team, he will tell everyone the truth.

Outside, Kanika bumps into Faltu and comments that she changed her clothes quickly.

Faltu gets caught off-guard, holding a basket full of flowers, and lies to Kanika, saying since she went outside to get some medicines for Rijula and cooked, so she got sweaty.

Kanika nods slowly at her statement while saying it looks like she went to play cricket and Faltu stiffens internally.

Kanika then asks her since she escaped her Ittarpur to come here, she must have a dream of doing something and Faltu dismisses the topic but just saying that she wants to become independent.

Faltu remembers Rijula's words about not telling anyone about her cricket trials and tries to leave Kanika's inquiry swiftly.

However, Kanika speaks that Faltu's face is only innocent but her little white lies are not.

Meanwhile, Ayaan and Tanisha are talking to each other on a call about their future married life with Tanisha saying she wants to change Ayaan's lifestyle since she doesn't have any passion.

Ayaan gets turned off by her comment and cuts the call while Kanika enters Tanisha's room.

Kanika asks Tanisha whether Ayaan even replies to her "miss you" but Tanisha says she has a party to attend now.

Internally, Kanika gets angry and states that Ayaan must be doing a lot for Faltu behind the back but doesn't even reply to her daughter's "miss you".

Similarly, Rijula tells Ayaan that she has a bad feeling about Kanika asking questions to Faltu about her dreams & ambitions.

On the other hand, Tanisha, Sid, Suhana, and Kumkum's children get ready for Tanisha's bachelorette party followed by Faltu who comes downstairs, wearing heels and a blue dress.

Dadi and Savita get awestruck by seeing Faltu like this who looks utterly beautiful with her hair straightened and untied.

© Copyright tellybest.com, 2022, 2023. All Rights Reserved. Unauthorized use and/or duplication of any material from tellybest.com without written permission is strictly prohibited.
Cached Saved on: Wednesday 25th of January 2023 06:09:29 PMCached Disp on: Sunday 5th of February 2023 03:43:10 AM