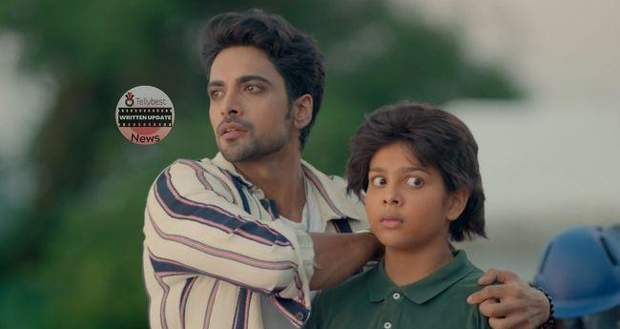 Today's Faltu 15th November 2022 episode starts with Ayaan and Su reaching the airport when Ayaan still keeps recalling about Faltu and prays to God for her.

Meanwhile, at the guest house, Angoori is coming upstairs to take Faltu downstairs for her Mehendi.

Pratap tries to convince Angoori when Anmol comes over and Pratap tells her Faltu is at the guest house.

Angoori asks Pratap where he and Anmol are going and Pratap says he is going to play cricket.

Suddenly, Pappi and his baraat (wedding procession) arrive at the Singh house way ahead of time.

Angoori remarks to Pappi saying that Pappi couldn't stay away from his soon-to-be bride.

Pappi concurs and asks where Faltu is when Angoori sends Jamuna to check on her.

Meanwhile, Faltu as Anmol and Pratap are trying to sneak past when suddenly Anmol drops the bag which makes Pappi question where they are going.

Pratap convinces Pappi while Jamuna announces that Faltu isn't at home and that she has checked everywhere.

On the other hand, Ayaan gets a call from someone at the Singh house who informs him about the situation and Ayaan asks his man to do what was decided in case things go sideways.

Meanwhile, Anmol and Pratap reach the stadium late and get berated by the coach.

Pratap asks Faltu if she is scared, to which Faltu responds with an affirmative and says these are huge men against whom she is playing.

He tells Faltu to just remember Ayaan's words and have confidence in her abilities.

Pratap says that it doesn't matter whether the men on the opposite team are huge as she will still run circles around them.

Encouraging Faltu, he says that her bat is her weapon today which will make her win the tournament.

Faltu then recalls Ayaan telling her that when she wins this match it will be a win for all girls everywhere.

Meanwhile, Pappi tell his goons to search every nook and corner for Faltu.

Then Pappi taunts Charan reminding him about the promise made by Faltu and asking him where he has hidden Faltu.

Charan says he doesn't know anything about it when Pappi says that he should be grateful that he has agreed to marry his daughter.

Pappi further says that if his baraat goes empty-handed today Charan will spend the night in jail.

On the other hand, Faltu recalls the doctor's words when suddenly her eyes become blurry and she is unable to tie her laces.

Just then, Ayaan comes and starts to tie her laces and motivates her to not get scared by the opponents.

Ayaan tells her that technique is king when Faltu says the technique is queen when she notices Ayaan was her illusion.

Pratap arrives there and informs her that she will open and Ittarpur wins the coin toss.

Meanwhile, Charan tells Pappi to call the police when Pappi asks Pratap to be brought forth.

Ratan reminds Pappi that Pratap has gone to play the match which awards lakhs of rupees, which gives Pappi an idea.

© Copyright tellybest.com, 2022, 2023. All Rights Reserved. Unauthorized use and/or duplication of any material from tellybest.com without written permission is strictly prohibited.
Cached Saved on: Monday 21st of November 2022 07:37:30 AMCached Disp on: Wednesday 7th of December 2022 02:59:12 PM