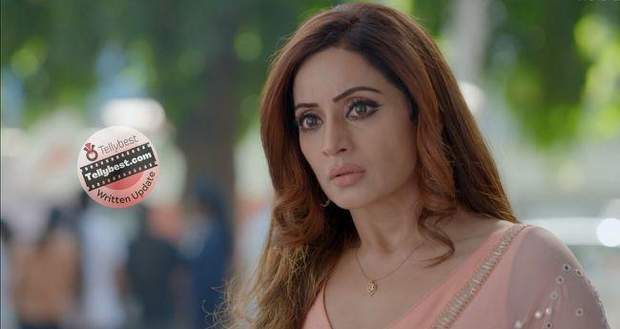 However, Faltu says that she feels awkward in the dress as it's short and that she can't even walk in the sandals she is wearing.

Faltu tells Dadi that she will help with the household work instead of going to the party while Su, Tanisha, and Sid try to convince her.

Dadi shouts that her decision will be final and tells Faltu that she will go with the kids to the club for partying.

Rijula tells them to not pressure Faltu if she doesn't want to go while Sid says that no one will go if Faltu is not coming since she is their guest.

Sumitra takes Sid aside and scolds him saying that he should not cancel his plans for Faltu while he reveals that it is all a part of his plan.

Meanwhile, Faltu agrees and the kids leave while Kanika thinks that she has to expose Faltu who is deceiving the whole Mittal family.

At the club, Faltu gets mesmerized and says that it looks like a scene from the movie while Aayesha tells her that she will meet Hritik Roshan too.

Being a fangirl of Hritik, Faltu gets excited while Aayesha tells her that she will get to meet Hritik too sometime since celebrities often come to the parties.

Aayesha tells Faltu to enjoy herself as she will go and sit since she's pregnant.

A guy comes and asks Faltu for a dance while she doesn't understand and runs to Aayesha.

Aayesha laughs as she tells Faltu that this is normal in nightclubs and that he was asking her to dance.

Sid keeps his eyes on Faltu and stops her in the way when she's getting the water for Aayesha by engaging in conversation with her.

Sid tricks Faltu to drink the spiked juice and lies to her that it is only juice.

Faltu gets intoxicated while Sid tries to convince her to dance.

Meanwhile, Kanika talks to an informant and finds out that Ayaan had given 1 lakh for Faltu so that Pappi does not marry her.

Kanika figures out that Aayan helped Faltu escape and gets infuriated.

Meanwhile, at the club, Faltu changes the mood with her dance after which they all sit down to play truth and dare.

The bottle turns on Faltu and she chooses dare while Sid dares her to reveal her story of how she got to Mumbai from Ittarpur.

Tanisha and Kinshuk get angry at Sid for doubting Aayan and tell Faltu that they will leave.

However, Faltu says that she will now tell her own story on her own and tells them about how she was born and how her name made her life miserable.

Sid tries to get the truth out of her while Faltu says that Aayan gave her the direction to complete her dream and for that she is grateful.

Sid asks Faltu if she escaped from Ittarpur with Aayan while Tanisha gets angry at him for putting words in Faltu's mouth.

However, Faltu accepts that she and Aayan returned to Mumbai together which shocks everyone.

© Copyright tellybest.com, 2022, 2023. All Rights Reserved. Unauthorized use and/or duplication of any material from tellybest.com without written permission is strictly prohibited.
Cached Saved on: Wednesday 25th of January 2023 09:13:12 AMCached Disp on: Wednesday 1st of February 2023 06:14:39 PM