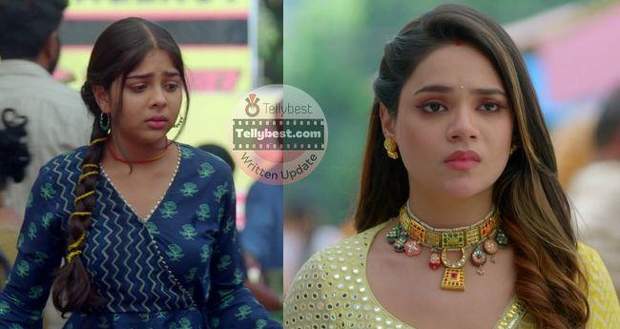 Today's Faltu 16th January 2023 episode starts with Madhuri explaining to Faltu how to pack the crust in packages. Faltu moves her hand over the packaging machine but Madhuri stops her saying that the machine is deadly hot.

Faltu says that she has never seen a machine like that and hence she did not know that.

As Madhuri leaves Faltu and gets to work although she burns her hand a few times initially but gradually gets a hang of it.

Faltu's success was short-lived as there is a short circuit in the room and the curtain next to the switchboard catches fire.

Faltu senses the fire and smoke and starts crying for help.

In the meantime, the cricket boys are heading towards Faltu's room as Ayaan’s subordinate wants to meet with her.

They see the smoke and bring buckets of water and start banging on her door. Faltu gets out of the room following the noises and cries for help while Madhuri realizes that Faltu can't see them.

Meanwhile, Sid tells Tanisha that he has found out about Faltu's whereabouts and everything related to her.

Tanisha says that she does not understand why is Faltu lying to them to which Sid replies that clearly Pappi is not married to Faltu but still Faltu is married to someone she doesn't want to disclose.

Sid holds Tanisha's hand and says that he will not let anyone betray her as she is very innocent.

Tanisha says that no one is betraying her, Ayaan is just worried about Faltu because of his promise to Charan.

Sid says that a mere promise can't make Ayaan leave his life for a girl and also it doesn't explain why Faltu has started avoiding Ayaan.

Back at the chawl, everyone is blaming Faltu for hiding her reality while Charan and Pratap who have just arrived stand beside her.

Faltu stands up and joins her hand to apologize to everyone and says that she only hid her identity because she didn't want people to pity her or be a burden on someone else.

Gaikuar, the owner asks Charan to pay the due for the room and leave their chawl.

However, everyone at the chawl starts convincing Gaikuar to let Faltu and her family stay and let this situation slide.

Meanwhile, Tanisha says that she needs to learn the truth about Faltu's husband and requests Sid to find out about him.

As Tanisha leaves, Sumitra says that Tanisha is blind as she can't see her husband publicly romancing another woman.

Sid says that one day the whole empire will belong to him and so will Tanisha.

In the meantime, Ayaan's subordinate informs Ayaan about the incident that took place at the chawl.

Tanisha on the other hand, calls Kanika and asks her to find a way out of the 30 days separation between Ayaan and her.

Kanika says that she is on her way to the Mittal house and has some news regarding this.

Meanwhile, the doctor tells Charan that the blood is stopped from getting into Faltu's eyes because of a tumor.

The doctor says that the tumor is very small and can be operated but it has to be soon also the cost has increased because of the tumor and will now be 20 lakhs.

Faltu asks Charan and Pratap to leave the hospital as she doesn't want to get operated on because of the high cost and has left everything to God.

Back at the Mittal house, Kanika announces that now all the problems hovering over Tanisha's and Ayaan's lives have subsided and now they can live together.

© Copyright tellybest.com, 2022, 2023. All Rights Reserved. Unauthorized use and/or duplication of any material from tellybest.com without written permission is strictly prohibited.
Cached Saved on: Wednesday 25th of January 2023 09:06:28 AMCached Disp on: Monday 6th of February 2023 05:38:06 AM