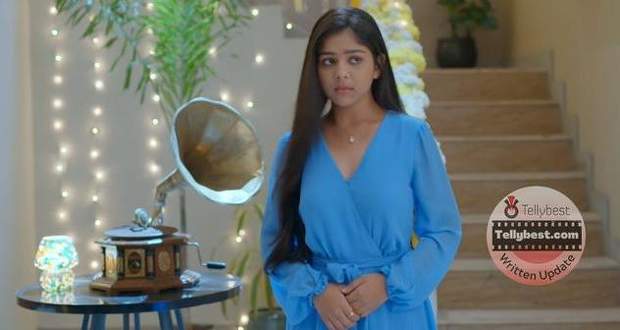 Today's Faltu 17th December 2022 episode starts with Faltu saying that she came together with Ayaan to Mumbai.

However, seeing the reactions of others, she adds that she found out about Ayaan and her being on the same plane and how she ended up in his house only.

Sid tries to get the desired answers from Faltu but fails as she stays on the same lie that she and Ayaan agreed on.

Tanisha says that they should end the game and start leaving while Faltu thinks that it is not that easy to trap her.

Flashback shows Faltu seeing Sid talking to the bartender and then pretending to drink the spiked juice and throwing it in the other glass.

Back at the Mittal house, Kanika bangs on Ayaan's door asking him to open up since she needs to talk while Savita and Rijula come there.

Savita calms her saying that Arjun is already in a deep sleep while telling her that Tanisha is also upset with her for not being present during her Haldi ceremony.

Kanika smirks as she says that she should overlook all the things at the events for Tanisha's future.

Rijula thinks that there is something wrong as Kanika's anger and her insistence to see Ayaan was different.

Back in Ittarpur, Pratap brings food for Charan and his family while Antima comes there with her husband and says that she will not eat such food that is given as begging.

Meanwhile, Ayaan has a dream where he confesses to Faltu that he loves her but cannot be with her due to his promise of marriage to Tanisha.

Ayaan wakes up from this half-dream while asking him why he is having such dreams with Faltu in them.

On the other hand, Faltu and the others return home safely as they all thank Sid for the amazing planning.

Tanisha takes Faltu away saying that she needs her for something while Faltu takes the support of a wall and says that she will sleep there only.

Seeing her adorable gestures, Tanisha calls her cutie and takes her toward Ayaan's room.

Faltu starts rambling on about the bride and groom not seeing each other before marriage.

Tanisha tells Faltu that she wants to see Ayaan and tells her to knock on the door.

Meanwhile, Ayaan is lost in his thoughts as he thinks that his priority should be Tanisha only.

Just then he hears a knock and asks who it is while Tanisha and Faltu talk alternatively with screeching noises.

Ayaan asks Tanisha what she is doing there while Tanisha states that she bought a gift for her and leaves telling him to open the door after a few minutes.

Ayaan opens the door and gets shocked to see Faltu while Tanisha calls him and asks how he liked the gift.

Faltu gives him the ice cream that Tanisha got for him and he tastes it while telling her that butterscotch would have been better.

Tanisha apologizes saying that she can't figure out his favorites and disconnects the call after a few minutes.

Ayaan tells Faltu to go to sleep while she asks him if he's still upset with her for going to the party.

However, Ayaan tells her that he is not upset with her and tells her to get rest as she will have her trial match soon.

Ayaan again gets a knock at his door and he opens it thinking that it is Faltu and taking her name.

However, he gets shocked to see Kanika as she enters his room and asks him if was expecting Faltu.

Ayaan reasons telling her that Faltu had come to give him the ice cream that Tanisha had got for him.

Kanika says that her daughter is like that as she will do everything to please her husband.

Further, Kanika talks in circles saying that Janardan always prides on him and says that Ayaan will never lie.

She asks Ayaan to what extent that is true while Ayaan tells Kanika that she should leave these silly things and focus on the marriage of her daughter and him that is happening the next day.

© Copyright tellybest.com, 2022, 2023. All Rights Reserved. Unauthorized use and/or duplication of any material from tellybest.com without written permission is strictly prohibited.
Cached Saved on: Thursday 26th of January 2023 02:20:43 AMCached Disp on: Tuesday 31st of January 2023 07:20:24 PM