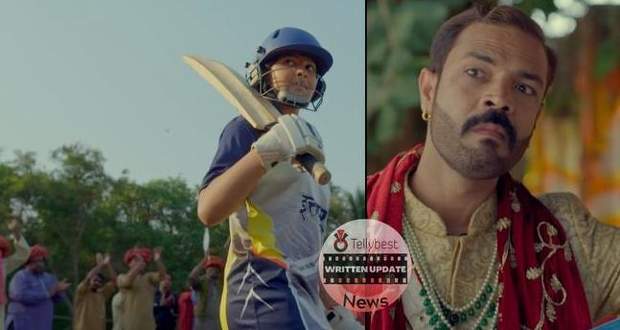 Today's Faltu 17th November 2022 episode starts with Pappi dragging Faltu to get married to her while Ayaan is at the airport waiting for his flight.

The announcement of the flight is heard as Su goes to board the plane while Ayaan gets a call from his employee.

He informs Ayaan about Pappi dragging Faltu to get married to her.

However, Ayaan tells him to give money to Pappi so that he can let Faltu go.

Back at the ground, Ayaan's employee gives money to Charan to give to Pappi so that Faltu can be free.

Pappi however refuses to take the money as he says that now it's a matter of pride and again drags Faltu to get married to her.

Faltu gets out of his grip and starts arguing with him while Pappi raises his hand in anger.

Ratan stops him saying that he can do anything he wants after he gets married to her as it will cause drama now.

Just then, Charan comes there and tells Pappi that he won't let him marry Faltu.

On the other hand, Ayaan has heard all the conversation and leaves to save Faltu telling Su to tell his mother that he will be back before the start of the engagement.

Pappi call the fake police and say that Charan will be put in jail if Faltu does not marry Pappi.

Angoori also starts her drama and emotionally blackmails Faltu into agreeing to the marriage with Pappi.

Charan tells Faltu to not ruin her life and she says that she cannot let him go to jail.

Meanwhile, at Ayaan's house, Tanisha looks around his room and tells her mother-in-law and Ayesha that she wants to spend all her time with family and does not want to work all the time.

Ayesha asks Tanisha if she has discussed it with Ayaan as he wants a working wife to which Tanisha replies that she is sure he would understand her point of view.

Back in the village, Faltu's sisters are getting her ready as her aunt taunts her and leaves.

Just then, Pratap comes there and she hugs him getting emotional.

She tells him that she always considered herself useless but he makes her acknowledge the talent of cricket inside her.

He made her realize that she can also be Anmol (priceless) hearing the applause from the viewers.

Pratap tells her that he is calling Ayaan as only he can save her from this forced marriage.

Just as Faltu says that she doesn't wanna put him in any more trouble, Ayaan knocks on her window and tells her to help him inside.

Faltu helps him slide inside the room when they both slip and Ayaan ends up holding her by the waist to save her from falling.

© Copyright tellybest.com, 2022, 2023. All Rights Reserved. Unauthorized use and/or duplication of any material from tellybest.com without written permission is strictly prohibited.
Cached Saved on: Monday 21st of November 2022 07:32:29 AMCached Disp on: Wednesday 7th of December 2022 02:57:30 PM