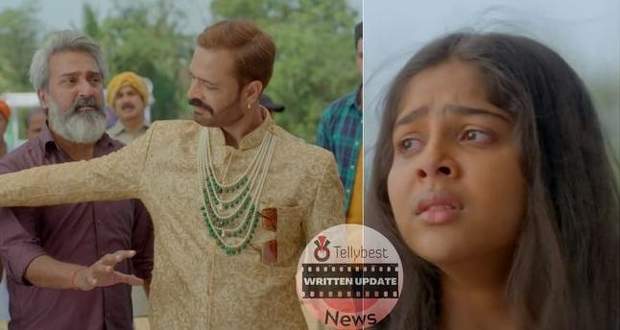 Today's Faltu 18th November 2022 episode starts with Ayaan holding Faltu and saving her from falling while they look into each other's eyes.

Ayaan apologizes to them and asks for a moment with Faltu alone.

Once they leave, Ayaan locks the door and tells Faltu that she cannot get married and needs to fight for her freedom.

However, Faltu says that nothing can happen as she has already agreed to the marriage.

Ayaan tells her that he knows Pappi is forcing her and has already told the commissioner about it which will save Charan from going to jail.

Ayaan tries to convince Faltu by saying that cricket needs her and he wants her to prove that she's Anmol (priceless), not Faltu (useless).

Faltu gets encouraged and agrees to it by holding his hand as a picture of RadhaKrishna is seen in the background.

Seeing it as a good sign, Ayaan drags Faltu saying that they need to flee now and immediately.

Worrying about her family, Faltu stops him and asks him how he will save her family from the villager's taunts which will kill them slowly every day.

Before Ayaan can say anything, a knock is heard on the door and Charan tells Faltu to open the door.

Ayaan hides in the cupboard and Faltu opens the door while Charan reveals that he heard everything and requests Ayaan to come out.

In Mumbai, the family welcomes Su happily as she talks about all the videos and photos she took of Ittarpur.

Savita asks about Ayaan while Su reveals that he had to stay back for an emergency at the mart.

However, he has also promised to return before the Mahurat for the engagement.

Back at Ittarpur, Ayaan comes out and apologizes to Charan for what he suggests but promises to get her enrolled in the best cricket Academy and take care of food and shelter.

Meanwhile, at the Mittal house, Kanika gets angry saying that the engagement can't happen after the Mahurat, and asks Janardan what was the need to send him to Ittarpur when Sid could have gone and handled the mart.

Just then, Sid comes there and informs them that there is no emergency at the mart.

Janardan calls Ayaan but a security officer at the airport informs them that the phone must have been left behind at the airport.

Sumitra tries to incite the family saying that there was no emergency at the mart still Ayaan did not return for the engagement.

Sid also suggests that Ayaan might be with another girl and Janardan stops saying that this is the reason why he is never given responsibilities.

On the other hand, Faltu meets Jamuna for the last time and tries to keep her tears at bay while Jamuna apologizes to her for not being able to do anything to stop the marriage.

Faltu gets emotional as she says that she knew her mother loved her and tells her that she has chosen to live her life happily.

Jamuna hugs her daughter emotionally while Faltu asks for her blessings and leaves afterward.

Faltu takes Charan's blessings and leaves with Ayaan to go to the city of dreams.

They see Pappi and his friends drinking and hide from them while Pappi leaves saying that he will come back to drink after getting married.

While Faltu and Ayaan go towards their car, the sirens of the car go off and Pappi's friends go towards it seeing that the car is from Jaipur.