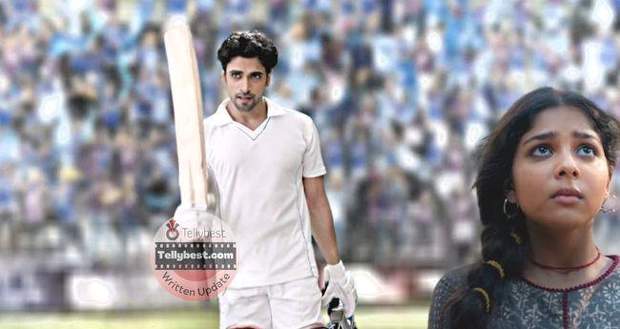 Today's Faltu 19th December 2022 episode starts with Sid trying to create more drama while Ayaan silences by asking him if tried to make Faltu drink alcohol or not.

The family gets shocked while Sumitra tells Ayaan to not make such lies.

However, Sid says that he accepts it as he did to make sure that Janardan's reputation does not get tainted.

Sumitra tries to blame Ayaan and Faltu but Ayaan stops them and tells everyone that Faltu is not at fault as she was busy trying to fight against death as Pappi was after her the whole time.

He goes and apologizes to Faltu while she stops him and tells him to not insult her by apologizing.

She further goes to everyone in the family and apologizes to them while telling them that Ayaan was just trying to save a helpless girl's life.

She goes to Tanisha and thanks her for being her friend while telling Dadi that she is thankful she accepted her like her own daughter.

Faltu leaves after the heartfelt apology while Rijula goes after her.

Ayaan tries to apologize to Tanisha while Kanika stops him and tells Janardan to answer her questions and ask if he knew about this whole ordeal.

She asks him if did all this to get her 50% of the shares while Ayaan interrupts her.

Janardan slaps Ayaan and tells him that he was living in fake security and pride by trusting him.

The sound rebounds through the whole house as Ayaan falls to his knees and begs for forgiveness.

Savita tries to talk on behalf of her son while Jamardan tells her to not interfere.

Janardan tells Ayaan to not address him as a father since he does not deserve to be his son.

Sid goes to Tanisha and tells her that as a son of the Mittal family, he would like her to forget everything and start a new life with Ayaan.

However, as her best friend, he does not want her to live with the person who gave her such a scarring and traumatizing betrayal.

Tanisha looks towards Ayaan and tells him that she had asked him for the only thing which was honesty and he could not even give her that.

Tanisha apologizes to Janardan as she says that she cannot marry Ayaan.

As Tanisha and Kanika leave, Faltu stops them from entering the car and requests them to forgive Ayaan.

Tanisha tells her that Ayaan betrayed her trust and ruined their friendship along with their relationship.

Faltu says that Ayaan did not betray her while Tanisha says that she considered her a friend too but Faltu also betrayed her trust by keeping her in the dark.

Kanika says that she is sure Ayaan and Faltu had some relationship and tells Tanu to leave.

However, Faltu stops them saying that there is a relationship because she and Ayaan's dreams are intertwined.

She tells them how Ayaan and her have a teacher-student relationship and how he knows the pain of broken dreams.

Faltu requests Tanisha to not leave Ayaan's side as he needs her the most and tells her that Janardan will never forgive Ayaan.

Tanisha thinks that Faltu is right and that Ayaan hid the truth because of Janardan's fear.

Finally, Tanu tells Kanika that they might have overreacted inside and should go back.

Faltu runs inside to give the family good news about the marriage not breaking while Kanika gives Tanu a weak smile.

Inside the Mittal house, Sumitra humiliates Ayaan and blames him for the downfall of their family and career.

However, Faltu comes there just then and tells everyone that the marriage will happen today only as she has convinced the bride to stay back.

The family gets shocked as Kanika and Tanu renter the house while Faltu says that now she will go and convince Janardan.

Rijula tries to stop her but Faltu says that she will convince him as she is the reason for the whole drama.

© Copyright tellybest.com, 2022, 2023. All Rights Reserved. Unauthorized use and/or duplication of any material from tellybest.com without written permission is strictly prohibited.
Cached Saved on: Wednesday 25th of January 2023 05:18:24 PMCached Disp on: Wednesday 1st of February 2023 06:13:25 PM