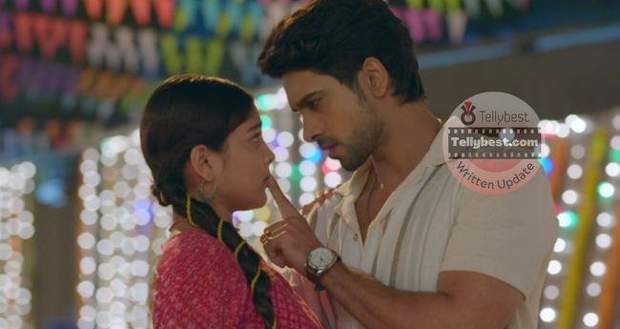 Today's Faltu 19th January 2023 episode starts with Tanisha hugging Ayaan as he enters the room while everyone else leaves.

She slowly runs her fingers all over Ayaan's body and looks deeply into his eyes while taking him to the bed but Ayaan stays still and thinks about Faltu.

Tanisha finally holds Ayaan by his neck and makes him lie down on the bed but Ayaan stops her.

Tanisha surprisingly asks Ayaan that what is wrong with him after all they are married now and she knows he is thinking about Faltu.

Ayaan says that since they are childhood friends, they should give their relationship some time to transition so that they come closer naturally rather than forcefully.

Tanisha says that as long as that is the reason she is fine with it.

However, Tanisha thinks to herself that she knows Ayaan is lying and Sid might be true after all.

Meanwhile, Charan has brought all the spices for Faltu to work.

After some time, Charan and Pratap get up to look for the eye check-up camp which the cricket boys suggested about.

However, Ajeet comes in and asks them not to go to any camp for Faltu as he has talked to some doctor who has agreed to do Faltu's operation for free.

Ajeet says that he has brought some clothes for them as well.

Faltu and Charan say that they are already indebted to him a lot and just can't accept the clothes from him.

Ajeet tells Charan that he thinks of all three of them as a family but in fact, wants to marry Faltu and has come to seek Charan's permission.

The next day, Ayaan is thinking about last night and hates himself for letting down Tanisha once again.

Ayaan goes and apologies to Tanisha and asks her for some time so that they could have the best married life ever.

Tanisha says that after thinking a lot she also realized that he was right after all and will wait for him until he is ready.

Tanisha says that she will talk to Janardhan so that he would let him work again from today.

Ayaan says that he must have done something fruitful in his last birth which made Tanisha his wife in this lifetime.

Back at the chawl, Ajeet tells Charan that he is mesmerized by Faltu's simplicity and purity.

Charan tells Ajeet that he is a form of God who is ready to take Faltu as his wife knowing that she is blind.

However, before Charan could say anything more, Faltu stops him and says that since it is one of the biggest decisions of her life that is why she would like to talk to Ajeet alone.

Meanwhile, Tanisha tells Sid that she has sent Ayaan back to work so that he stays near Faltu and maybe that is how they will unravel the truth about Faltu.

Back at the chawl, Faltu tells Ajeet that he needs to know the truth before he makes a proposal.

She says that she is already married even though it is not recognized in the eyes of others and the law and her heart has accepted that man as her husband.

Faltu says that since this concerns his life that is why she has told him the truth but at no cost can she marry him.

Ajeet says that he understands her limitations and wants to be her friend if not her husband.

Faltu happily holds Ajeet's hand and says that she will be honored to be his friend.

Meanwhile, Ayaan's car breaks down on his way to the office.

He gets off his car at the same place where Faltu and Ajeet are present.