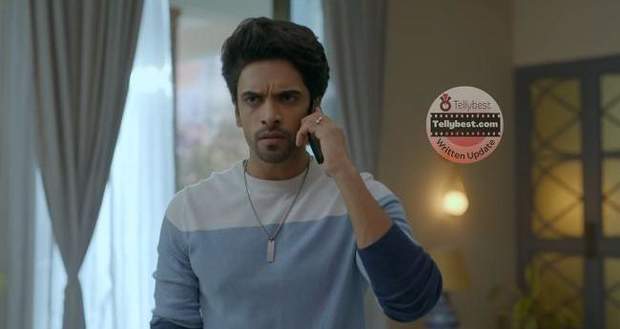 Today's Faltu 1st December 2022 episode starts with Tanisha looking Faltu up and down while telling Ayaan that he could have told the servant to aid her wounds.

Ayaan tells her that Faltu saved his Dadi's life so it was not fair to leave her to servants.

Further, Tanisha asks Faltu if she eloped from Ittarpur due to forced marriage or if there was another man.

Ayaan stops Tanisha while she changes her expressions and jokes that she was just curious as love stories can be quite interesting.

However, Faltu says that her life is filled with more action and drama of the villager's taunts and her father's helplessness.

Faltu brings a smile to her face as she says that this is why she has come to make her dreams true and make her parents proud.

Later, Faltu brings Rijula to her room and tells her that she has to leave as she knows the strain it is putting on Ayaan and Tanisha's relationship.

Faltu tells Rijula that all will be chaos if they find out that Ayaan was the one who had helped her reach Mumbai.

Just then, Savita and Dadi come there which makes Rijula and Faltu worry.

Back at Ittarpur, Ratan calls Angoori and tells her about Faltu staying with the Mittals and his plan of causing drama there to bring back Faltu.

However, Pratap overhears their conversation and rushes to inform Charan and Jamuna about it.

Meanwhile, back at the Mittal house, Savita and Dadi scold Faltu for thinking of leaving the house and bringing her to the dining table to have food.

Dadi feeds Faltu with her own hands while Faltu recalls how the same treatment was given to only boys in their village.

Just then, Tanisha takes the plate from Faltu and mocks her saying that she is making sure that a poor person like Faltu doesn't get used to living in such a luxury.

Faltu cries silent tears as Tanisha keeps mocking her by saying that they should feed Faltu on a servant's plate and that she is sure Faltu won't mind.

Rijula stands up angrily as she asks Tanisha what she's talking to a guest of the family.

However, Tanisha argues that Faltu is not a guest of the house and that they have kept her only because Rijula brought her there.

Tanisha also suggests giving money to Faltu instead of keeping her in the house for saving Dadi's life which shocks everyone.

Faltu stands up and tells Tanisha that she does not need her money and knows to stick to her room.

Faltu tells Tanisha that she will eat from the servant's plate only as she knows that she's just a guest for a few days.

Just then, Ayaan comes there and asks what is happening while Faltu starts acting as if Tanisha filled her mouth with food.

Ayaan and Faltu start talking about 'Dal Bati Churma' while Tanisha feels grossed out thinking of eating with her hands as unhygienic.

Later, Tanisha and others leave while Faltu convinces Dadi and Rijula to not tell Ayaan about anything.

On the other hand, Sumitra is scolding a servant when Faltu's phone rings and Sumitra picks up the call.

Charan on the other hand asks Faltu how she reached Ayaan's house but gets confused hearing someone else's voice.

Faltu comes there just then and takes the phone to talk to her father.

Once Sumitra leaves, Charan informs Faltu that Ratan and Pappi have found out about her staying at the Mittal house and tells her that she has to inform Ayaan about it.

Back at the hotel, Sid stops Pappi and Ratan from going over to the Mittal house and tells them to create chaos the next day during Ayaan's wedding.

© Copyright tellybest.com, 2022, 2023. All Rights Reserved. Unauthorized use and/or duplication of any material from tellybest.com without written permission is strictly prohibited.
Cached Saved on: Wednesday 25th of January 2023 09:39:09 PMCached Disp on: Wednesday 1st of February 2023 06:41:17 PM