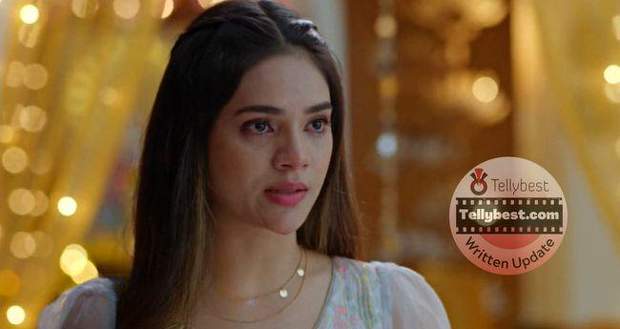 Today's Faltu 20th December 2022 episode starts with Janardan feeling angry at Ayaan as he destroys Ayaan's pictures and recalls the moments leading up to the present.

He says out loud that Ayaan did not even care for him.

However, Faltu comes there just then and tries to advocate for Aayan by saying that Ayaan is shattered right now because he loves his father.

Faltu tells him how Ayaan worked day and night to bring his mart to success and was only trying to help a poor girl fulfill her dreams.

Janardan says that Ayaan's lies have not only hurt him but Tanisha too since she has left him.

Faltu says that Tanisha has returned as she has realized Ayaan's value and requests him to give Ayaan another chance too.

Back in the hall, Tanisha tells Ayaan that she is not there because of Faltu but is there for him.

She asks him if he did because he was scared of Janardan or if there was any other reason.

Ayaan looks into Tanisha's eyes and tells her that he just wanted to help Faltu complete her dream since she had helped him make the mart successful back in Ittarpur.

Tanisha says that she has one last question and asks him if he is marrying her only to obey Janardan.

Ayaan bows his head as he looks down and tells Tanisha that he had agreed to the marriage at first because of Janardan but now he wants to spend his life with her.

Just then, Janardan comes downstairs and Aayan begs and pleads with Janardan to forgive him as he would become an orphan without him.

The family members also request Janardan to forgive Ayaan and Janardan hugs him saying that a child cannot be an orphan when he has his parents.

Ayaan again slides the ring onto Tanisha's ring finger while Faltu says that she hopes the family stays happy forever.

Faltu reveals that she is leaving and tells each member individually to take care of themselves.

Rijula tells her that she is not going anywhere while Faltu says that she has to fight her battles on her own.

Ayaan recalls Charan telling him to make Faltu "Anmol" as he stops her saying that he wants to do something for her for the last time.

He goes to Kanika and requests her to give Faltu a fair chance at the trial match and tells her that Faltu is a great cricketer.

Faltu leaves while Ayaan looks on towards the door with the family getting busy with the marriage preparation.

Meanwhile, Sid vents his anger by slamming the cupboard while Sumitra mocks him saying that he cannot do anything.

Sid says that he is sure there is something more than friendship between Ayaan and Faltu.

Sumitra also agrees as she reveals that Ayaan did not say that he loved Tanisha when asked for the reason to marry her.

Meanwhile, Faltu is walking around looking for a place to stay.

Sumitra mocks Sid saying that he should become a slave like his father while Sid says that Faltu has not left the city yet.

At the same time, Faltu encourages herself saying that she will complete her dreams and make Charan and Aayan proud.