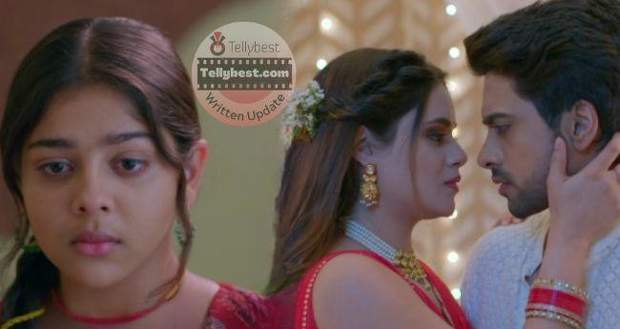 Ayaan spots Ajeet and recognizes him immediately but soon Ayaan realizes that Ajeet is not alone but is with Faltu.

Ayaan watches Faltu laugh with him which shatters his heart as he realizes that Faltu was right about having a husband and was not bluffing.

Ajeet gives Faltu the deposit that her family submitted in the hospital as now her treatment will be free.

Ayaan tries to follow both of them but soon got bumped into a bunch of women and lose them.

Meanwhile, Sid goes to the Pandit ji who was present on the night when Pappi forced Faltu to get married in that same temple.

Sid says that he knows Pandit ji was the one who was chanting the wedding wows knowing that it was a forceful marriage.

Pandit ji tells Sid everything that happened on that night other than who filled the sindoor in Faltu’s head however, Pandit ji had a mobile phone which he found lying at the corner of the temple that night.

Back at the chawl, everyone assembles in Faltu’s room including Madhuri, and then asks Faltu why is her family lying to them as they know she is married because Ayaan came inquiring about her husband.

A woman has also seen Faltu eating ice cream with a man who gave her some money and assumed it to be her husband.

Faltu manages the situation by telling everyone that the man they saw is her doctor who is very friendly to them and has returned the deposit money from the hospital back to them.

Meanwhile, Tanisha tells Mayawati and Savita that she is tired of all the rituals as every day she is asked to do something which she doesn't want to do when Savita asks her to prepare ladoos for pooja.

Tanisha tells Sumitra that Savita and Mayawati are insisting on her against her will to make the laddoos.

Tanisha says that she will ask Ayaan to bring ladoos when he returns back from work.

Savita and Mayawati leave angrily while Sid enters and tells Tanisha about the phone.

Sid says that he has given the phone to his friend to open the phone as it had a password.

At the site, Ayaan gets a call from Tanisha who tells him everything and asks him to bring back ladoos on his way back.

Ayaan tells Tanisha not to worry as Mayawati likes things done according to the custom in a traditional manner and she only wanted Tanisha to make the laddoos as it brings good luck to the newlywed bride.

After hanging up the phone, Ayaan thinks to himself how Tanisha does not respect the cultures that have been going on for generations in their family.