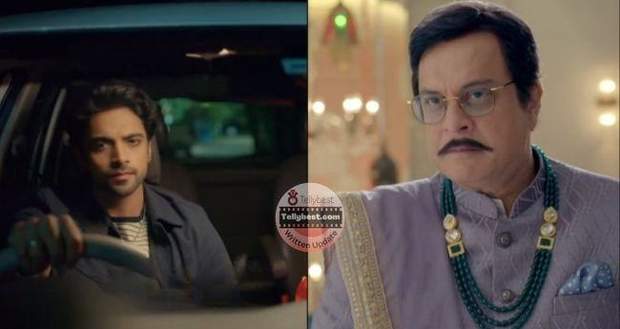 Today's Faltu 20th November 2022 episode starts with Faltu feeling a wave of shock go through her body as she realizes that Ayaan is getting engaged to someone else.

Meanwhile, Ayaan wonders what has happened to her as she leaves his hand and walks towards the other way.

Faltu tells Ayaan that he has done enough for her and should go home for the engagement.

However, Ayaan tells her that it won't be much time as he has already booked a cab and arranged a room for her at the hotel.

Faltu tells him that he need not worry about her and should think of it as training for her to be independent.

Back at Ittarpur, the villagers gather outside Ratan's house demanding to know the location of Faltu from Charan.

Meanwhile, Ayaan makes Faltu sit in the cab and gives her a phone to call him while telling her to take care.

At the Mittal house, the guests start asking about Ayaan while Govardhan takes them away.

Janardan tells Savita that he will not consider Ayaan as his son or the heir of the family anymore if he fails to show up on time.

Back in the cab, Faltu calls her father Charan and talks to him while he treats the call as a booking call to throw off the villagers and Ratan.

The driver overhears Faltu's call and extracts information from her about her not knowing anyone in the city except Ayaan.

Further, the driver manages to convince Faltu to let him take another route and calls up his friends with evil intentions for Faltu.

Charan tells the villagers that this is his family member and they should not interfere in it.

Furthermore, he tells that he does not know where Faltu is.

Back at the Mittal house, Kanika stops Tanisha from calling Ayaan and tells her that she will get married to Sid if Ayaan doesn't show her.

Tanisha questions her mother while Kanika reminds her that the deal was to get married to the heir of Janardan's business, whether it be Ayaan or Siddharth.

Just then, Sid comes there and acts sincerely with Tanisha while telling her that he is ready to get engaged to her but only if she agrees.

Kanika's eyes sparkle with happiness while Tanisha tells Sid that her marriage and engagement are not a first come, first serve based event.

Away from the drama at the Mittal house, the driver stops the car on a stranded road and asks Faltu for her phone with the excuse that his phone battery died.

He also switches off Faltu's phone and goes to talk to his friends telling them that they should rob her bag which must contain a lot of money.

The driver goes back to the car and insists Faltu have tea at the stall and tries to take her bag.

However, Faltu already feels that the driver's intentions are evil and runs away from there with the driver and his friends following after her.

© Copyright tellybest.com, 2022, 2023. All Rights Reserved. Unauthorized use and/or duplication of any material from tellybest.com without written permission is strictly prohibited.
Cached Saved on: Monday 21st of November 2022 01:08:44 AMCached Disp on: Saturday 10th of December 2022 02:27:38 PM