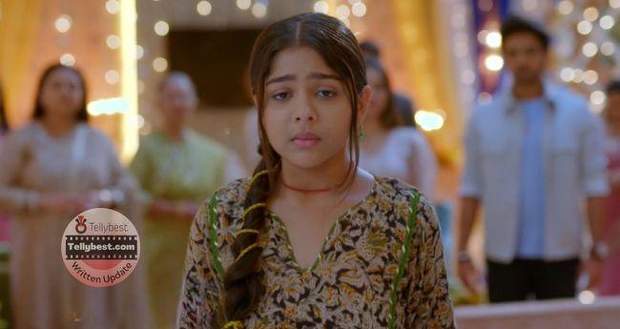 Today's Faltu 21st December 2022 episode starts with Faltu wishing to get by today somehow as she has her match the next day.

Meanwhile, at the Mittal house, the family celebrates the pre-marriage rituals while Tanisha again smiles at everyone.

Back in the market, Falti gets the address for the nearest railway station and gets motivated as she hears two shopkeepers talking about how an actor went from sleeping in the railway station to becoming the top actor.

As Faltu walks towards the railway station, she sees two people following her and hides in a stall while thinking that there are many Pappis in Mumbai.

At the same time, Tanisha and the Mittal family are talking about a pre-wedding photo shoot while Ayaan is lost thinking about Faltu.

Tanisha asks if he's listening and he nods and says that he's okay with whatever she says.

The lady from the stall tells Faltu to leave while some kids try to steal the lady's eggs.

However, Faltu scolds the kids and makes them leave while the lady becomes grateful to her.

On the other hand, Sid informs Pappi that Faltu is out of the house and tells him to catch Faltu before her match at the stadium the next day.

The lady tells Faltu to sit with her as she coughs and says that the kids take advantage of her sickness and steal her eggs.

Faltu sees the old lady having difficulty selling the eggs and tells her that she will help her sell the eggs.

Meanwhile, a man keeps his eyes on Faltu and tells someone on call that she is stuck near the railway station and is not willing to leave.

Back at the Mittal house, Ayaan gets frustrated thinking about Faltu and throws his phone which lands near Rijula's feet.

She picks it up and walks towards Ayaan while he makes up an excuse.

However, Rijula tells him to not lie and straightforwardly asks him if he has fallen in love with Faltu.

He recalls all his moments with Faltu but says no while Rijula asks him why his eyes don't match the answer that his lips are giving.

Rijula questions Ayaan and he says that she is giving the wrong name to his concern for Faltu.

Rijula explains to him that hiding what is kept in his heart is wrong and tells him to let go of what is right and what is wrong for once.

Rijula tells him to not blame himself while telling him that Faltu has even got the reference of the president of the women's cricket association.

Ayaan says that even then the path to becoming a cricket is hard while Rijula tells him that she has something to ask him.

She tells him to forget that he's going to get married to Tanisha and close his eyes to imagine getting married to the person who is in his heart.

Ayaan gets reluctant but closes his eyes as he imagines Faltu standing in a bride's dress in front of him telling him that his bride is there.

Just then, Kanika, Janardan, and Tanisha come there and tell him that he has a surprise for him.

Janardan reveals that Tanisha has given her share of the properties to Ayaan which shocks Ayaan.

He asks why she gave them to him while she tells him that she will do everything to complete his dreams.

As Tanisha gives him the transfer certificate, Ayaan tells her that she should use it the way she likes.

Ayaan reluctantly takes the document while Tanisha tells him that he can focus on the business while she will focus on their family.