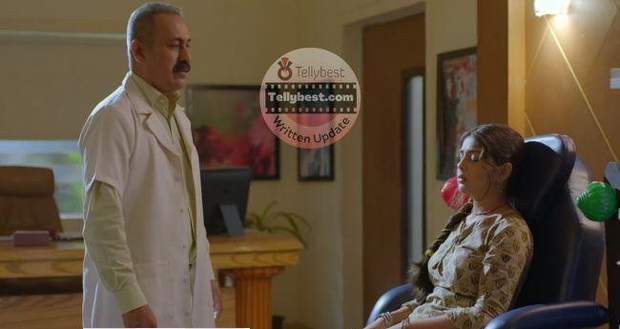 Today's Faltu 21st January 2023 episode starts with Pratap taking Faltu to a sweet shop as they have gotten a part-time job there.

The owner asks Faltu to go back to her house as she is blind however Faltu refuses to go and says that although she cannot see yet the rest of her senses are more potent than anyone present there.

Meanwhile, Ayaan’s subordinate tells him that Faltu is not married and the man who was with her was just her doctor.

Ayaan angrily hits his fist on a car and says that why Faltu keeps lying to him and what is this big truth that she wants to hide.

While driving back to the house, Ayaan goes to the same sweet shop in which Faltu is present.

Ayaan tells the owner that he needs freshly prepared laddoos because it has to be for a pooja, the owner gives Ayaan the laddoos prepared by Faltu.

Both Ayaan and Faltu feel each other’s presence even though they don’t know they are nearby.

Back at the Mittal house, the pooja starts which makes Tanisha restless.

Tanisha goes to Mayawati and apologizes while crying however, Sumitra comes and says that Tanisha should not cry as she cannot see tears in her eyes.

Tanisha says that only Sumitra understands her as the rest of the people at the house are angry with her.

Janardhan enters and says that if Tanisha does not want to make Laddos then Mayawati and Savita should not force her.

Meanwhile, Faltu and Pratap gifts Charan a kurta from the money they earned that day and also give him the remaining money along with free sweets.

Pratap asks Charan not to eat the sweets as on their way back, Faltu kept smelling the Laddos and has her eyes on them all along.

Faltu asks Pratap to remain quiet and then tells Charan that he will have a hero-like look once he wears the kurta.

Back at the Mittal house, Ayaan arrives and gives the laddoos to everyone.

Janardhan goes to Mayawati and Savita and tells them that Tanisha should never cry in the house again, not even a strain on her head.

As Janardhan leaves, Ayaan goes to Mayawati and Savita and tells them that they should not take Janardhan’s words to their hearts as he cares about Tanisha a lot, after all, she is his business partner’s daughter.

Back at the chawl, Faltu asks Pratap to take a photo of Charan in the kurta as when she gives her eyesight back then she will see that picture.

Charan asks Faltu to get ready as they have to go to the doctor.

Faltu says that 20 lakhs is a big amount and she does not want the doctor to suffer any type of loss to which Charan replies that she should not worry about the doctor as her topmost priority should be to get her eyesight back.

Meanwhile, Ayaan tells Rijula that he is perplexed by Faltu because he does not understand what is her story.

Rijula says that Faltu must have some necessity that is preventing her, to tell the truth to him.

Ayaan says if there is necessitation then she should have sought Ayaan’s help.

Ayaan says that he will go mad because of Faltu because he needs to learn the truth as only then he will be able to carry forward his relationship with Tanisha.

Ayaan says that he knows he is doing wrong with Tanisha but whenever he gets closer to her than he gets a vision of that night when Pappi and the goons kidnapped Faltu.

Back in Tanisha’s room, Sid gives Tanisha the phone which has come back from the repair shop.

Apparently, the phone has a wedding video which bothers Tanisha as she has a faint feeling that Ayaan might be the one who filled the sindoor in Faltu’s head.

Nonetheless, she hugs Sid and thanks him.

© Copyright tellybest.com, 2022, 2023. All Rights Reserved. Unauthorized use and/or duplication of any material from tellybest.com without written permission is strictly prohibited.
Cached Saved on: Wednesday 25th of January 2023 10:10:21 AMCached Disp on: Sunday 5th of February 2023 02:39:48 AM