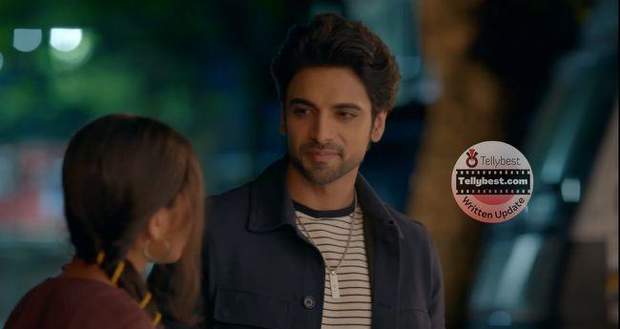 Today's Faltu 21st November 2022 episode starts with Janardhan announcing who Tanisha would marry and who will inherit the Mittal Empire.

Everyone anticipates that it would be Siddharth because Aayan is nowhere to be found but Su notices Aayan entering and brings attention to him.

Janardhan happily announces that Aayan will be his Heir.

Aayan goes up the podium next to his father and forces a smile as Janardhan tells everyone that the ring ceremony will be held within an hour.

Meanwhile, Faltu is getting chased by the goons.

At the Mittals, Janardhan interrogates as to where was Aayan and what was his reason for coming late to his own ceremony.

Aayan thinks to himself that this is not the time to elaborately tell everyone about Faltu.

Hence, he says that someone in the village wanted his help desperately and he could not turn them down.

Aayan tries to call Faltu, unaware of her situation and thinks that something is wrong.

Savita takes Aayan’s phone and tells him to get ready and that he will get the phone once he is ready.

On the other hand, in the village Jamuna paces around her room saying that something is wrong with Faltu as she can feel it.

Charan calms Jamuna and tells her that Aayan has promised her to look out for Faltu.

Jamuna’s eyes fills with water as she tells Charan that she never loved Faltu over her dead son.

Charan assures Jamuna that Faltu will return and when she does everyone will address Jamuna as Faltu’s mother.

Meanwhile, at the Mittal’s House Aayan is distracted throughout the ring ceremony thinking about Faltu.

Savita questions Aayan as to where is his presence of mind and reminds him that Tanisha is waiting, Aayan says Faltu’s name but Su covers up for him.

Meanwhile, Faltu takes shelter near a tree to hide from the goons and prays that her phone works.

Aayan tries to call Faltu but Savita stops him, at the same time Mayawati tells Kumkum that she misses her daughter.

Tanisha tells everyone that she is lucky to get married to her childhood friend and that she will do her best to follow all Mittal family laws and never let Janardhan or Aayan down.

Aayan lightens the mood by saying that it’s not true that the husband stops talking after marriage but it starts from the ring ceremony only, he promises that he will make sure he fulfils all his responsibilities.

Just then Aayan gets a call from Faltu while distressed Faltu cries over the call to help her.

Faltu tells Aayan that the driver was actually a goon and while she’s on the call a truck crosses her path and she falls to the ground.

Aayan hears Faltu’s scream and rushes out to track Faltu with the tracker he has put in his phone while Siddharth sees Aayan so he decides to follow him.

The goons catch up to Faltu and she hits them with a log.

At the same time, Aayan asks a tea seller about Faltu.