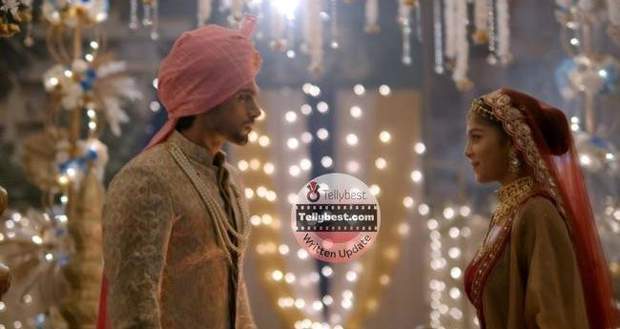 Today's Faltu 22nd December 2022 episode starts with Faltu trying to sell the eggs but failing as she recalls how Ayaan taught her about product visibility.

Back in the present, Faltu makes a jingle and starts singing it to sell the eggs.

A man comes and buys all the eggs which makes both Faltu and the old lady happy.

Back at the Mittal mansion, Janardan tells Ayaan that Tanisha has set an example by sacrificing her shares and tells Ayaan to make sure that he keeps Tanisha happy after marriage.

Janardan leaves while Rijula comments that the father is blind to not even see his child's pain.

She turns to Ayaan and asks him what he saw when he closed his eyes and if he loves Faltu.

Ayaan ignores the questions and says that he has already hurt Janardan enough and that from now on Janardan's happiness will be his first priority, even before his own liking and happiness.

On the other hand, the old lady hugs Faltu as she tells her that she can sleep in her home while she goes to get some food for her.

Meanwhile, in Ittarpur, Angoori is feeding Som while Charan, Jamuna, and Laajwanti come there happy that Faltu is still not caught.

However, Angoori taunts them as she says that Pappi is still in the city and will surely bring back Faltu.

Just then, Pappi calls them and informs them that Ayaan has left Faltu stranded in the streets of Mumbai and that he is going to bring her back to Ittarpur as his bride.

Elsewhere, the old lady brings PavBhaji for Faltu and asks her about how she reached Mumbai.

Faltu tells the old lady her life story and the old lady blesses her for achieving her dreams and making it big in the city.

Charan tries to call Faltu but the call gets switched off which makes the family worried.

Faltu also thinks to call Charan and gets upset when she sees that her phone is out of charge.

She asks the old lady if she has a place to charge her phone and also a job for her.

The lady tells her that she has but Faltu has to eat first.

On the other hand, Kanika tries to talk to Tanisha about Ayaan but stops after seeing her happiness at being back together with Ayaan.

Meanwhile, Faltu tries to get the mobile shop owner to charge her phone but the man asks her to pay first.

Faltu gets worried and goes to the man who had bought the eggs from her and asks him if he is following her.

The man refuses after which Faltu asks him for advance and the man happily gives her the money.

Further, the man calls Ayaan and informs him about how he helped Faltu.

However, on the other line, it is Sid and not Ayaan who smirks as he thinks that now he will expose Ayaan and Faltu once again.