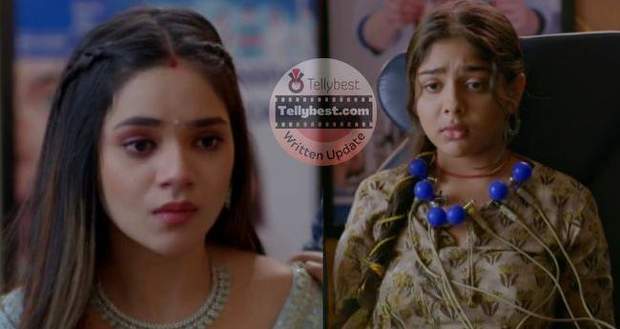 Today's Faltu 22nd January 2023 episode starts with Faltu, Charan, and Pratap going to the eye checkup camp where Charan requests the doctor to do something about Faltu’s eyes.

The doctor says that he will get in contact with some foreign donors who can help with Faltu’s treatment.

Faltu, Charan, and Pratap leave and on their way back they find out that an outlet of JM mart is going to open in the neighborhood and are recruiting jobs.

Meanwhile, Tanisha and Sid are watching the video which was present on the phone found at the temple.

Tanisha watches Ayaan fighting with Pappi and the goons however, the video ends in the middle making Tanisha miserable.

Sid tells Tanisha that only Faltu knows the truth about that day and he will find a way to make her tell Tanisha the truth.

Sid gets a call from his subordinate and finds out that Faltu went to the eye check-up camp and needs 20 Lakhs for her treatment.

Later that night, Ayaan is sleeping in the room when Tanisha comes and watches him sleep lovingly.

Tanisha thinks to herself that she will find the truth about Faltu so that she can work on her marriage.

Ayaan who is pretending to sleep feels guilty for not standing up to Tanisha’s expectations.

The next day, Sid bribes a doctor to use a lie detector test on Faltu during her treatment.

As Sid and Tanisha hide, Faltu, Charan, and Pratap enter and sit in front of the doctor.

The doctor tells them that they have found a donor for Faltu’s treatment and they have to go through one psychological test before the surgery.

Meanwhile, Ayaan decides to take Tanisha on lunch but he finds out that Tanisha is already out with Sid since morning.

Ayaan gets worried when Tanisha does not pick up her phone.

Back at the hospital, the Doctor makes Faltu sit on the lie detector machine.

The doctor starts by asking simple questions from Faltu to which Faltu replies honestly.

The doctor asks Faltu about Ayaan Mittal which makes Faltu uncomfortable and she starts getting up from the chair.

Faltu yells at the doctor and says that she is not illiterate and knows what is going on.

Faltu continues to say that she has been to other eye tests as well and understands that this is not how things are supposed to be done at a hospital.

She asks the doctor to call her father immediately or else she will start shouting.

The doctor calms her down and says that he is going to bring her father while she should just relax.

© Copyright tellybest.com, 2022, 2023. All Rights Reserved. Unauthorized use and/or duplication of any material from tellybest.com without written permission is strictly prohibited.
Cached Saved on: Wednesday 25th of January 2023 09:16:38 AMCached Disp on: Sunday 5th of February 2023 02:47:46 AM