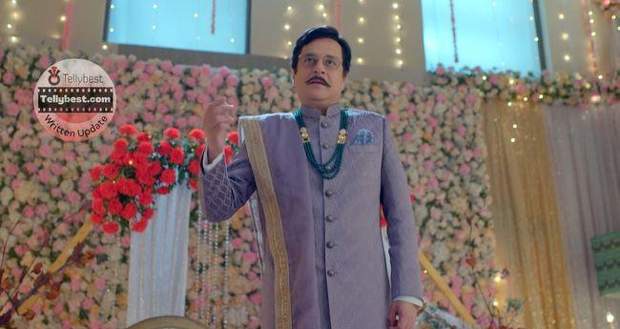 Today's Faltu 22nd November 2022 episode starts with Faltu running away from the goons while Aayan manages to find her and calls out to her to stop her from running.

Faltu feels relieved seeing him and falls to the ground in tears while a procession separates the two.

Ayaan crosses the people and goes to check up on Faltu while Siddharth comes there and gets happy seeing him together with a girl.

He starts taking pictures while the tension at the Mittal house keeps growing more and more.

The guests keep on asking about Ayaan while Govardhan and Janardan keep on making excuses.

Sumitra tries to fill Kanika's mind with doubt as she tells her that Ayaan is missing both before and after the engagement.

Meanwhile, Ayaan scolds Faltu for her stubbornness and tells her that he is responsible for her.

Faltu tells Ayaan that her stubbornness bore fruit as she points towards the engagement ring on his finger.

However, Ayaan tells Faltu that she is most important to him and that he would have spent the rest of his life in regret had something happened to her.

Meanwhile, at the Mittal house, Janardan asks Savita about Ayaan while she tells him that he must be somewhere there.

Janardan gets frustrated while Savita informs him that Dadi is crying and is upset that the daughter of the house, Rujula is not present for the engagement.

Janardan turns away from her as he tells her that he has not stopped anyone from attending the engagement.

Savita argues how Rujula would come to know that her brother Janardan hates her husband's guts.

Janardan says that it is not his fault Rujula broke the tradition he made and married a local guy.

Meanwhile, Faltu sees the fireworks as India wins the cricket match against Bangladesh and gets happy.

Ayaan tells her that one day she will also be praised like the cricket gods and goddesses.

Faltu tells him that he can go back as she will go to the hotel on her own but he scolds her and tells her to do as he says.

At the Mittal house, Kanika tells the family that she will not let her daughter get embarrassed anymore.

Kanika calls Ayaan irresponsible while the Mittal family tries to calm her down.

Siddharth comes there just then and tells the family that he went after Ayaan and saw him inquiring about a girl when he should be celebrating his engagement with Tanisha.

The family does not believe him when Ayaan comes there and announces that whatever Sid has said is correct.

Everyone misunderstands the situation and Kanika taunts Ayaan.

Ayaan stops Sid from talking against him and tells the family that he saw a girl getting harassed by some guys and went after them to save the girl.

Tanisha asks him how he knew about the girl being in trouble when he met her on the way home.

Ayaan says that he also has a reason for it and welcomes Rujula into the house while Janardan avoids looking at her.

© Copyright tellybest.com, 2022, 2023. All Rights Reserved. Unauthorized use and/or duplication of any material from tellybest.com without written permission is strictly prohibited.
Cached Saved on: Wednesday 23rd of November 2022 06:16:40 PMCached Disp on: Thursday 1st of December 2022 02:43:31 AM