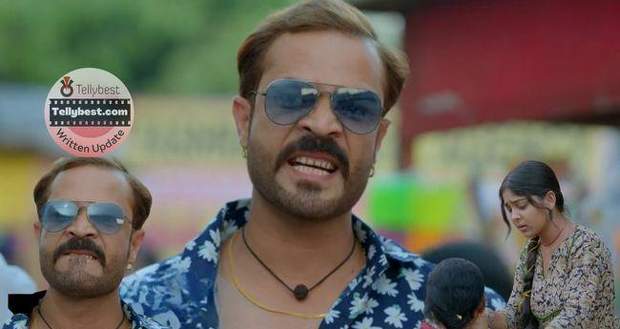 Today's Faltu 23rd December 2022 episode starts with Sid picking up Ayaan's call and hearing the man informing Ayaan about Faltu and her location.

Sid smirks as he deletes the call from the history and leaves the room.

Later, Ayaan comes out of the shower and calls his man.

However, the man gets shocked as he turns to see Faltu and starts stuttering.

Ayaan worries that the man is caught while Faltu thanks him and leaves.

Ayaan tells the guy to be careful and calls Faltu smart before disconnecting the call.

Further, Sid again calls Pappi and scolds him while giving him Faltu's location and a new plan to be executed at night only.

Sid tells Pappi to kidnap Faltu at the time of Ayaan's marriage so that Ayaan can't leave his own marriage to save her.

Pappi says that he will marry Faltu as soon as he catches her while Sid tells him to make sure that the Mittal family and Charan find out about the kidnapping at the right time.

Sumitra sees Sid talking to himself and thinks that he has gone crazy.

Elsewhere, Faltu comes to the old lady and tells her that the guy again helped her charge her phone who had bought the eggs from her.

The old lady tells Faltu to call her family while Faltu gets upset and tells her about Ayaan and how her family doesn't know that she is alone in the city now.

Back at the Mittal house, the pre-wedding rituals get done while Su stands beside Rijula and requests her to call Faltu as she is worried about her.

Kanika notices Ayaan's dull behavior as he leaves saying that he has some work.

Back at the market, Pappi and his goons look around for Faltu and finally manage to find her as she helps the old lady drink water.

They keep an eye on Faltu as she switches on her phone and practices talking to Charan in a way that he won't get worried about her.

Back in the Mittal house, Rijula informs Ayaan about not being able to call Faltu while he tells her to not worry as he is sure Faltu will figure something out.

Su gives the phone to Aayan and he questions him about Faltu leaving the home and about Pappi's threats.

Ayaan calms him as he tells him that he knows where Faltu is and will keep his promise of protecting her.

As the call disconnects, Su hugs Ayaan saying that she knew his brother would do something.

Later, Ayaan is leaving when Sid bumps into him and asks him why he's looking so happy.

Both the brothers argue with each other with double-meaning words and Ayaan leaves telling him that he will take care of his sister-in-law, Tanisha.

© Copyright tellybest.com, 2022, 2023. All Rights Reserved. Unauthorized use and/or duplication of any material from tellybest.com without written permission is strictly prohibited.
Cached Saved on: Wednesday 25th of January 2023 06:45:01 PMCached Disp on: Tuesday 31st of January 2023 07:56:18 PM