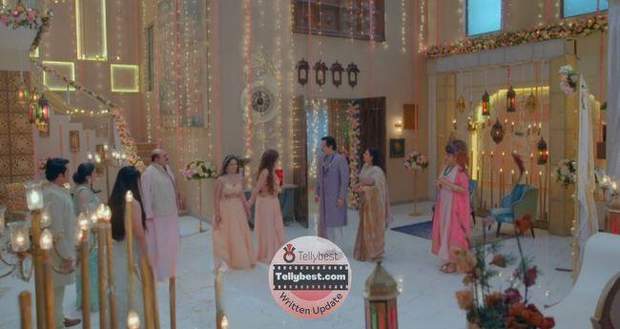 Today's Faltu 23rd November 2022 episode starts with Vilekha entering the Mittal house while Janardan sees her and turns to look away from her.

The other brothers also look down not being brave enough to go against Janardan and talk to their sister.

Ayaan apologizes to Janardan and the rest of the family as he says that he did not want to spend such a special day in his life without his Bua.

Flashback shows, Ayaan and Faltu going to Rujula's house as she gets shocked to see him with a girl.

Rujula invites both of them in as Ayaan sits with her and tells her the whole story of how Faltu ended up on her couch at this time.

Rujula agrees to keep Faltu in her house and tells her that she is her and Ayaan's responsibility now.

Faltu gets happy as she tells both Ayaan and Rujula that she will not let their hopes down and will prove herself as a star in the cricket world.

Ayaan further tells Rujula that he wants her to come to his engagement function even though he knows her equation with Janardan and Govardhan.

Rujula's husband comes there and gets surprised to see them while Rujula tells Ayaan that she is going to get ready to come to the engagement function with him.

Back in the present, Savita and others praise Ayaan saying that he has brought home the daughter of the house.

Janardan tells Kanika that he is sure of his son being loyal and responsible while Tanisha says that she has some doubts and asks to talk to Ayaan alone.

Meanwhile, at Rujula's house, Faltu gets sick and starts coughing as Fufaji (Rujula's husband) takes care of her.

She reveals that she misses her father and Fufaji gives Faltu his phone so that she can talk to her father.

Meanwhile, Charan and Jamuna are trying to call Faltu's number so that they can talk to her but it does not connect when they get a call from an unknown number.

Charan picks up the call and puts it on speaker as he realizes that it is Faltu and talks to her.

Faltu tells him about her being at Ayaan's Bua's house.

However, Angoori overhears them and informs them about Faltu's location in Mumbai to Pappi and Ratan.

Pappi further calls Faltu from Charan's house and tries to threaten her to know her whereabouts.

When that does not work, Pappu tries to blackmail her by saying that he will handle her parents who are still in Ittarpur.

Faltu says that she will get him jailed while Pappi argues that he knows she is with Ayaan and that he is going to ruin Ayaan's mart before catching her.

Pappi throws the phone on the ground and destroys it while his words linger in Faltu's mind.

© Copyright tellybest.com, 2022, 2023. All Rights Reserved. Unauthorized use and/or duplication of any material from tellybest.com without written permission is strictly prohibited.
Cached Saved on: Wednesday 23rd of November 2022 11:19:20 PMCached Disp on: Monday 5th of December 2022 12:02:07 AM