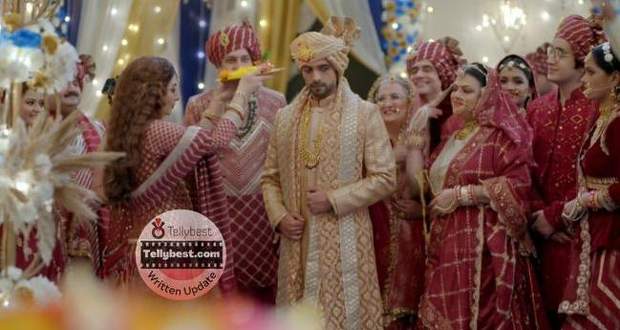 Today's Faltu 25th December 2022 episode starts with Faltu fighting the girls while Pappi comes out of the van and shocks Faltu.

He drags her inside the van while the man Ayaan had sent to look after Faltu runs after the van trying to save her.

Meanwhile, at the Mittal mansion, Ayaan and Tanisha exchange garlands while Savita gets emotional as she recalls how Janardan had told her that he will accept the child as his by marrying her.

Dadi comforts Savita and tells her that the relations are not so fragile to break so easily.

Meanwhile, Pappi tells his ally to reach the Matarani temple as he will marry Faltu there first before doing anything else.

Faltu tries to instigate the other girls against Pappi and they get shocked to learn that Pappi is forcefully marrying Faltu.

However, Pappi tells them to be glad that they are not being forced to do anything and kicks them out of the van.

Back at the Mittal mansion, Sid gets frustrated as Pappi is not picking up his calls while Sumitra comes there and taunts him saying that Janardan will increase his salary and promote him.

At the same time, Kanika apologizes to Janardan for going overboard while Janardan tells her that he understands.

The Panditji tells Ayaan and Tanisha to rest as the wedding will start after some time.

Back on the isolated road, the three girls get worried when Ayaan's man comes there and questions the girls.

The girls inform him about Faltu being taken to the temple by Pappi while the man calls Ayaan.

At the Mittal mansion, Rijula tells Ayaan that she is worried since Faltu is not picking up her calls.

However, Ayaan finally reveals to her that he has sent a man to look after Faltu.

Meanwhile, Faltu manages to punch Pappi and escapes from him while Pappi orders his goons to find Faltu at any cost.

Ayaan's man is on his way to Matarani temple while constantly trying to connect the call to Ayaan.

Faltu sees the man coming and is just about to wave her hands when Pappi again captures her.

Further, Pappi throws Faltu on the grounds as another goon brings a wedding outfit for Faltu.

Pappi mocks Faltu while addressing her as his baby and telling her to get ready to marry him.

They both argue while Pappi tells her that even Charan and Jamuna will see their wedding through video call.

The panditji tries to stop Pappi but Pappi puts a gun to his head and silences him.

Pappi tells Faltu to get ready and not try to escape or else he will put a bullet through her thick skull.

With immense bravery, Faltu tells Pappi that she would rather die than get married to him.

Pappi locks Faltu in the room and tells her to get ready.

Meanwhile, Ayaan sees his man's calls and calls him as the man informs him about Pappi abducting Faltu.

Ayaan tells Janardan that he wants to talk to him and Tanishan in front of everyone.

The family members ask what Ayaan wants to say while Kanika states his mind is still lingering with worry for Faltu.

On the hand, Sid thinks that it is time to work on step two of his plan and calls someone.

© Copyright tellybest.com, 2022, 2023. All Rights Reserved. Unauthorized use and/or duplication of any material from tellybest.com without written permission is strictly prohibited.
Cached Saved on: Wednesday 25th of January 2023 10:57:31 AMCached Disp on: Sunday 5th of February 2023 04:15:16 AM