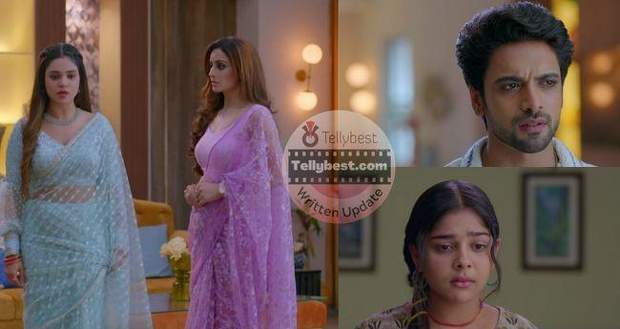 Today's Faltu 25th January 2023 episode starts with Pratap telling Faltu that only 10 people got selected in the academy and Faltu has still got a shot at it.

Charan enters and says that Faltu should first concentrate on her eye surgery as he fears that Faltu might not get her eyesight back at all.

Faltu tells Charan that he does not need to worry as she has full faith in God that he will not let Faltu go back to square 1 after bringing her so close to her destination.

Meanwhile, Ayaan thinks to himself that Tanisha is hiding something from him on the same day when Faltu got 20 Lakhs rupees and there has to be a connection to it.

Sumitra gets very very happy when Sid breaks the news of Ayaan’s and Faltu’s marriage to her.

Sumitra is unable to hold her horses in excitement and is going to expose the news to the Mittal family when Sid stops her and tells her that if she will tell anyone about it right now then he might lose Tanisha.

Back at the chawl, Pratap receives a video from Angoori in which she is fake crying trying to manipulate him and saying that Pratap has forgotten about her for the sake of Faltu.

She then asks Pratap to come back to the house or else she will die of starvation.

After watching the video, Pratap says that his mother must have gone to a good drama school as she knows how to cry crocodile tears.

Pratap then says that he will not return until and unless Faltu gets her eyes treated.

Meanwhile, Angoori tells Som that she is happy about the fact that Lajwanti and Jamuna are going to Mumbai and it can be used in their favor and they can take over the entire estate and properties now.

Back at a restaurant, Tanisha asks Ayaan if he is only pampering her because he feels guilty that he is not being a good husband to her.

Tanisha says that he is still worried about Faltu but wants to make Tanisha happy which is why he brought her to lunch.

Ayaan feels that this is a good opportunity as Tanisha herself took Faltu’s name and now he can further inquire about the subject with her.

Tanisha tells Ayaan that he should be happy about Faltu because now after the operation she will be able to take care of herself.

Meanwhile, Pratap informs Faltu about the female cricket teams and their matches while Faltu practices her bating.

Pratap then starts imagining that Faltu has become very rich and also a big cricketer while Angoori tries to cut her way through the crowd and Faltu’s bodyguards telling everyone that Faltu is her daughter but no one is paying head to her.

Faltu imagines that when she becomes Rich then Ayaan enters and tells everyone that Faltu is a big liar and betrays people.

Meanwhile, Sid gets the Pendrive with Faltu’s full confession on it and then he thinks to himself how an eminent thunder waits in Ayaan’s way.

© Copyright tellybest.com, 2022, 2023. All Rights Reserved. Unauthorized use and/or duplication of any material from tellybest.com without written permission is strictly prohibited.
Cached Saved on: Wednesday 25th of January 2023 11:56:31 PMCached Disp on: Sunday 5th of February 2023 04:18:20 AM