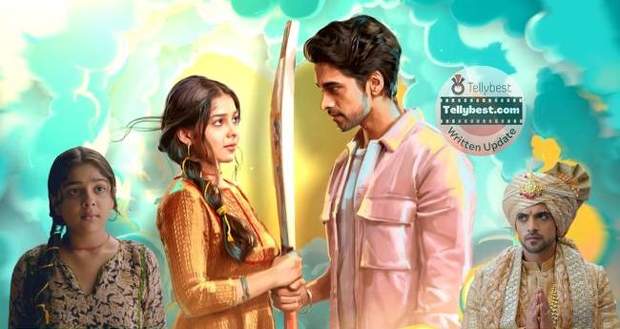 Today's Faltu 26th December 2022 episode starts with Janardhan getting angry at Ayan and asking him why he is worrying so much about Faltu.

Everybody looks at Ayaan in shock as he reveals that Faltu is in danger.

Kanika speaks up and asks Ayaan how he knows about Faltu who is in danger.

Ayaan says that Faltu handled her side of the promise of not contacting him but he also made a promise to his father of keeping her safe in Mumbai so he sent one of his men behind Faltu.

Kanika rolls her eyes at Ayaan's stupid comment while Savita says she cannot let him go anywhere on his wedding day.

Meanwhile, Faltu thinks about Ayan and how many times he saved her but this time, nobody will come to save her.

Pappi gets irritated as Faltu hasn't come out yet and knocks at her door.

At Mittal House, Kanika widens her eyes and asks Tanisha not to say yes to Ayaan who asks her if she will allow him to go save Faltu.

Ayaan tells Tanu that if he doesn't go today, he won't be able to meet his eyes with himself.

Tanisha allows Ayaan to go and makes Kanika angry with her decision.

Meanwhile, Rijula gets tears in her eyes, thinking how much love Ayaan has for Faltu but he hasn't shown anyone that yet.

On the other hand, Pappi videocalls Ratan in Ittarpur and says he is finally going to marry Faltu.

Ratan requests Pappi to leave Faltu alone but Pappi is too happy about finally getting her and also informs Angoori.

Faltu who is inside a creaky room decides to get ready after making a pact with God saying if nobody comes to save her this time, her belief in God will fade away forever.

Similarly, Ayaan races up his car to reach Faltu while Sid calls Pappi and threatens him to make Ayaan busy for four-five hours if he reaches there.

Sumitra hears Sid's conversation with Pappi and appreciates him for hatching a big plan like this but Sid says he's doing this so he can marry Tanisha as Janardhan had said, if Ayaan doesn't reach the Mandap in time, Tanisha's hand will be given to Sid.

Later, Faltu comes out of her room dressed in an orange Lehenga and tries to act all sweet with Pappi.

When she softly calls him Pappi Ji, Pappi dances like an excited monkey but his men ask him to be cautious since moments ago, Faltu had wanted to run away from him.

© Copyright tellybest.com, 2022, 2023. All Rights Reserved. Unauthorized use and/or duplication of any material from tellybest.com without written permission is strictly prohibited.
Cached Saved on: Wednesday 25th of January 2023 11:25:29 AMCached Disp on: Wednesday 1st of February 2023 06:48:20 PM