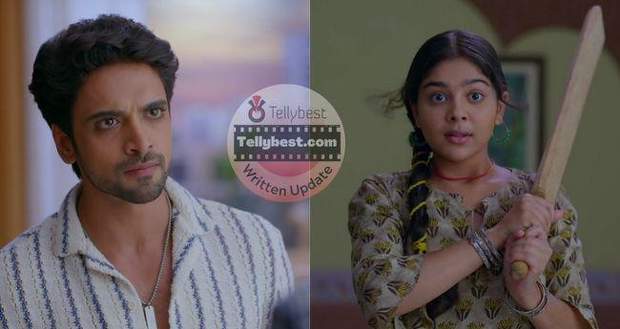 Today's Faltu 26th January 2023 episode starts with Faltu telling Pratap that she wants to become a cricketer not to earn money but to earn respect for herself, her family, and her village Iktarpur.

Faltu says that she wants people to think that she is ‘Anmol’ (precious) contrary to her real name.

Jamuna enters and says that Faltu has always been precious and it is Jamuna’s fault that she failed to realize Faltu’s potential.

Jamuna says that now she can proudly say that her baby girl Faltu is a million times better than 1000 boys.

Faltu hugs Jamuna and says that Jamuna should stop making her emotional otherwise her eyedrops will ooze out and get wasted.

Lajwanti who came along with Jamuna excuses herself and goes outside the chawl house to find Amar.

Amar and Lajwanti happily look at each other because they always wanted to escape from Iktarpur and live together forever.

Meanwhile, a courier arrives for Ayaan when the whole Mittal family is sitting together and having a discussion about Ayaan’s and Tanisha’s honeymoon.

Sid thinks to himself that soon Faltu’s confession will drop like a bomb on Ayaan’s life.

Back at the chawl, Jamuna expresses her regret for not treating her well in the past and then feeds Faltu with her own hands.

Amar messages Lajwanti saying that he has found a room in the chawl which makes Lajwanti happy.

Meanwhile, Ayaan goes back to his room and takes out the pen drive from the courier, and attaches it to his laptop but before Ayaan could play it Tanisha enters and asks Ayaan to come with her as Kanika and Janardhan have called him.

Ayaan and Sid together stand before Kanika and Janardhan and learn that from now on Sid will manage the units of their business within India and outside of India while Ayaan will only manage the new mart because they want to lessen the burden on Ayaan.

Back at chawl, Jamuna is worried because Lajwanti is missing from the house.

After a while, Lajwanti enters and lies to Jamuna that she went to see the chawl which makes Faltu think that Lajwanti sounds like she is lying.

Meanwhile, Janardhan tells Ayaan that his responsibilities towards his family are more important than his work because this time will not return in his life.

Sid happily thinks to himself that he has managed to take over the business and now he only has to take Tanisha from Ayaan.

After a while, Kinshuk and Suhana tease Tanisha about her honeymoon when Ayaan enters and asks about the whereabouts of his laptop.

Tanisha tells Ayaan that she has left Ayaan’s laptop and pen drive in the cupboard safely.

© Copyright tellybest.com, 2022, 2023. All Rights Reserved. Unauthorized use and/or duplication of any material from tellybest.com without written permission is strictly prohibited.
Cached Saved on: Thursday 26th of January 2023 11:59:29 PMCached Disp on: Thursday 2nd of February 2023 09:01:17 PM